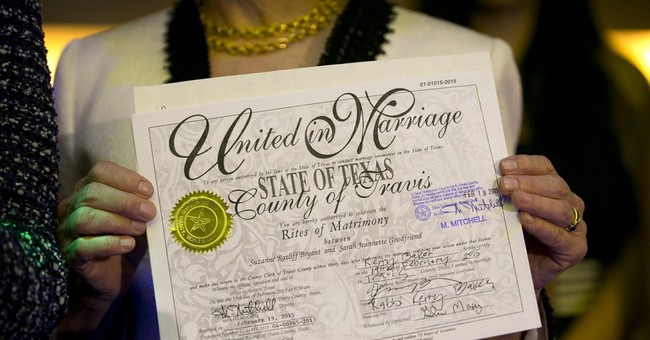 Linda Barnette has issued marriage licenses in Grenada County, Mississippi for 24 years. On Tuesday, she resigned.

“I choose to obey God rather than man,” Mrs. Barnette wrote in her one paragraph resignation letter to the Grenada County Board of Supervisors.

“I am a follower of Christ and I believe strongly that the Bible is my final authority,” she wrote. ‘The Bible teaches that a marriage is to be between a man and a woman. Therefore, because of the recent ruling of the U.S. Supreme Court, I can no longer fulfill my duties as Circuit Clerk and issue marriage licenses to same sex couples.”

Another worker has been appointed to replace Mrs. Barnette. It’s unclear if Grenada County will hold a special election to permanently fill the elected post.

“I told my supervisors a while back if it happened, I would tender my resignation,” she told me. “I had already decided in my heart that I could not issue marriage licenses to same sex couples. It’s my Christian belief. As a follower of Christ, I could not do it. The bible teaches it is contrary to His plan.”

Mrs. Barnette is a Southern Baptist and her husband once helped Franklin Graham with his national festivals. So when it came to choosing between her job and her faith – there never was any real debate.

There are many public workers just like Mrs. Barnette who are struggling with the Supreme Court’s decision to redefine marriage. I received private correspondence from a minister who told me about a North Carolina clerk who resigned. The clerk refused to comment or go public over fears she would be attacked by LGBT activists.

Brian Robertson is Mrs. Barnette’s pastor at Friendship Baptist Church. He said had two reactions to her resignation.

“I am saddened in the fact that we are losing a wonderful county clerk and a very faithful and hard worker,” he said. “I am grieved as a minister and Christian because of the circumstances that have caused her to have to resign.”

However, Dr. Robertson also had praise for his parishioner.

“I applaud her as a brother in Christ,” he said. “Her testimony to the Lord is more important to her than serving man.”

The Mississippi pastor suspects she will be the first of many to lose their jobs because of their Christian faith.

“Political propagandists want to force Christians who do not agree with the liberal mindset out of office,” he said.

I asked Pastor Robertson if he was concerned about LGBT activists coming after Christian ministers. His response was rather interesting.

“I pray that I am targeted,” he said. “I will use the statement Joshua made many years ago. As for me and my house – we will serve the Lord.”

In the coming days I believe Christians will be forced to abandon their jobs in public service. Those who remain will be targeted with lawsuits and investigations from the activists.

Resign or face the consequences.

Make no mistake. America is about to undergo a religious purging in the public marketplace – at the hands of secular jihadists.