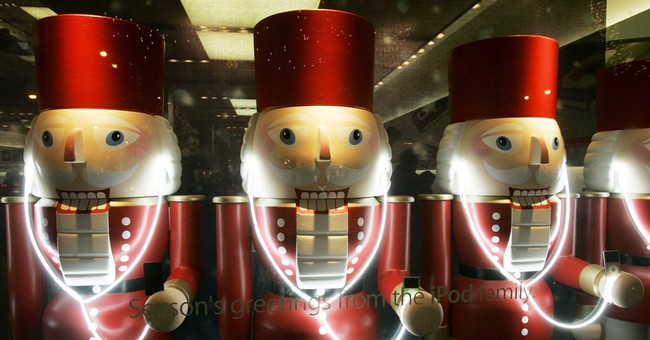 We haven’t even had time to hang the mistletoe and would you believe there are already skirmishes breaking out in the war on Christmas?

Over the years I’ve covered my fair share of anti-Christmas school house shenanigans. There was the dimwit who confiscated a child’s candy canes and the dunderheads who banned the colors red and green. And how can we forget about the simpletons who outlawed classroom poinsettias or the Junior League communists who rewrote the lyrics to "Silent Night"?

But those are junior varsity skirmishes compared to what happened at Butler Elementary School – where the PTA canceled a field trip to see “The Nutcracker” because there was a Christmas tree on the stage.

I’m not making this up, folks.

Television station WHDH did a stellar job reporting this act of lunacy. They report that a group of parents were alarmed at the “questionable content” of the popular ballet.

The questionable content had nothing to do with men in tights. The parents got their tutus in a twist over "O Tannenbaum."

“In the past years, there were parent complaints as "The Nutcracker" has a religious content,” PTA co-president Barbara Bulfoni told the television station.

Well, smoke some holly and call me jolly! Heaven help the unfortunate children who gaze upon a tree decorated with ornaments and sparkly lights and tinsel.

According to the reporting of WHDH, the issue came to a boiling point during a recent PTA meeting. Parents who supported the ballet were told accused of being discriminatory.

And to make matters worse, the PTA secretly canceled the trip.

Once the parents learned the trip had been canceled – they raised a ruckus and faster than you could say “Sugar Plum Fairy” – the PTA reversed its decision.

For the record - there are no reported instances of a child spontaneously converting to the Christian faith while attending a performance of “The Nutcracker.”

I commend the PTA for coming to their senses and I raise a cup of egg nog in their honor. I may need a double.