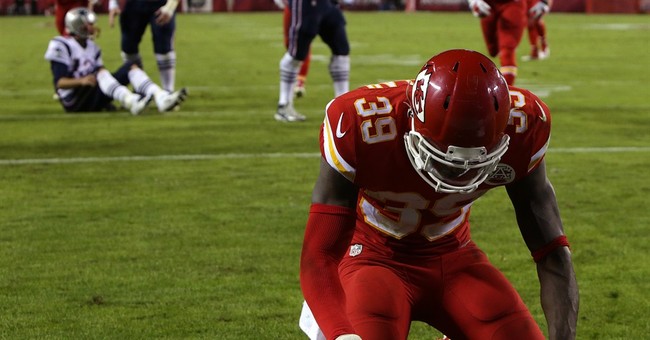 Sam Turner had been waiting all season for this moment.

The 16-year-old tight-end and wing for the Fort Myers High School Green Wave ran his route Friday night just as he had done countless times during practice.

The quarterback saw a window and took action. His pass was right on the money and Sam caught the ball and avoided a tackle. A teammate made a crucial block allowing Sam to score his first touchdown of the season.

Sam raised his hands in the air to honor a murdered teammate and then took a knee to thank God. The end zone celebrated lasted about five seconds.

“I felt like I had to thank God for blessing me with the talent and passion to play football,” Sam told me. “So I dropped to a knee and thanked God for everything he’s done in my life.”

But when Sam opened his eyes he saw a referee throwing a flag.

The Florida High School Athletic Association and the South Gulf Football Officials Association said Sam was not penalized for praying. Instead, they say he was guilty of violating Rule 9-5, Article 1 of the 2014 National Federation of State High School Associations football rulebook.

The Fort Myers News-Press reports the violation covers non-contact penaltieslike “any delayed, excessive or prolonged act by which a player attempts to focus attention upon himself.”

So let’s break this down.

Did Sam’s prayer delay the game? It lasted no more than five seconds. Five seconds. It’s not like he was holding a church service in the end zone.

“It was deemed excessive celebration in a manner that drew attention to the player,” FHSAA spokesman Cory Sobers told me. “I believe the arm motion is what drew the flag and not the kneeling or the prayer.”

“It’s a judgment call,” FHSAA spokesman Cory Sobers told the newspaper. “The penalty is not because he prayed. It’s because the official determined he was trying to focus attention on himself and that’s the bigger issue in the official’s viewpoint.”

But that’s not what Sam was trying to do.

“I was trying to thank God in my own personal way,” he told me. “What better way to do it than to drop down on a knee and humble yourself before him?”

I understand that rules are rules – but if there’s wiggle room for an official to make a judgment call – why not just let the kid pray?

“It’s a tough spot to be in,” South Gulf president Gil Whitmore told the newspaper. “We don’t know all these players individually so we have no idea what’s genuine and what’s not.”

I find that explanation a bit hard to swallow. It’s not like the kid was twerking on somebody or flopping around on the turf. He was obviously praying.

For what it’s worth Sam bears no ill will toward the referees.

“The referee had to make a decision and he has an unbiased opinion,” he said. “He wasn’t for or against any team. He wanted to stick to the rules.”

That’s not to say the college-bound honors student is not disappointed.

“When you’re a kid you have so much emotion and passion for what you do,” he said. “When you do something that’s great you want to give thanks to the One who gave you that opportunity. It’s disappointed that you aren’t allowed.”

Sam told me he learned his lesson and should he be so fortunate as to score another touchdown – he will conduct himself accordingly.

“I will definitely abide by the rules – but will give God praise the moment I get on the sidelines,” he said.

So the folks over at the Florida High School Athletic Association and the South Gulf Football Officials Association can stop losing sleep. They won’t have to worry about a teenager committing such an egregious act of religious devotion on the football field.