Does the Military Have a Problem with Jesus? 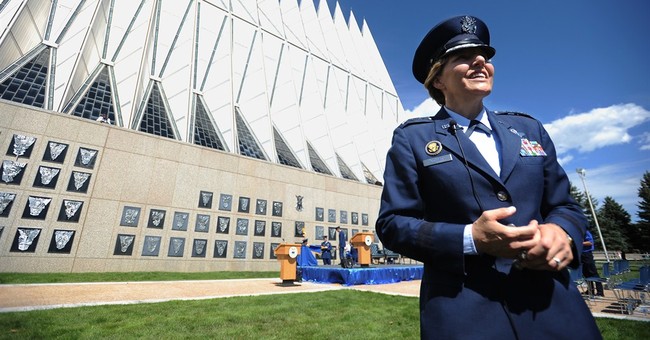 “So no matter how stressful your life can be with juggling family issues, relationships, career advancement, work, school, or any burden that life throws your way, cast it upon the Lord and He will sustain you,” the colonel wrote.

It wasn’t too longer after the newsletter was posted online before someone filed a complaint – lamenting that the colonel’s words had caused great angst and offense.

The Military Religious Freedom Foundation’s Mikey Weinstein reached out to Air Force officials at the Pentagon, the Air National Guard is governed by Air Force rules, as well as the 180th Fighter Wing demanding they remove what he called “that odious and offending proselytizing commentary.”

Before you could say God bless America, the military ordered the colonel’s remarks stricken from the newsletter. Ohio National Guard spokesman James Sims told me the column was a clear violation of military policy.

“It’s very clear what you can and cannot say in an Air Force publication,” Sims said. “Once it was brought to our attention and we compared it with the regulation, we found it was in violation of the regulation.”

So what rules did Col. Marquinez violate by referencing the Almighty? I want to quote from the official statement provided by the Ohio National Guard:

“The article violated AFI 1-1, Sections 2.11 and 2.12.1, and the Revised Interim Guidelines Concerning Free Exercise of Religion in the Air Force guidance, and finally, ‘The Air Force Military Commander and the Law’ book.”

A bit much, don’t you think? All that for mentioning that “With God all things are possible.”

I’m surprised the Air Force didn’t convene a court martial. For the record, Sims told me that to his knowledge the colonel was not reprimanded for writing about Jesus – just censored.

But the Air Force wasn’t content with just removing the colonel’s column. No sir. They had to publically shame and humiliate this officer and gentleman.

As Sims noted in his statement, after the article was removed from the newsletter, it was “followed up with a base-wide email, with updated link for the Singer, stating: ‘The 180th FW Public Affairs office has removed the article ‘A Spiritual Journey as a Commander’ from The Stinger, Volume 52, Issue 09, September 2014 due to sensitivities.”

Here’s one of the sections that violated the “godless” standards of the Air Force.

“I would not be the man I am today if it wasn’t for my mother leading our whole family to Jesus Christ,” Col. Marquinez wrote. “Her creed to us five children growing up is God first in your life, then comes family and third work.”

The Air Force regulations that were allegedly violated regard “government neutrality regarding religion.”

“Leaders at all levels must balance constitutional protections for an individual’s free exercise of religion or other personal beliefs and the constitutional prohibition against governmental establishment of religion,” the regulation states. “For example, they must avoid the actual or apparent use of their position to promote their personal religious beliefs to their subordinates or to extend preferential treatment for any religion.”

Think of it as a sort-of religious version of “Don’t Ask, Don’t Tell.”

As you might imagine, the Air Force’s censorship rubbed religious liberty advocates the wrong way.

“Not only did you publicly humiliate him by your actions, but you have sent a chilling message to other members of the Air Force, that they need to keep their faith to themselves or else rise the judgment of the command,” wrote Chaplain Alliance for Religious Liberty executive director Ron Crews in a letter to the wing commander.

“Your actions violated his rights under the First Amendment – both his free exercise of religion and his free speech,” Crews added.

Chaplain Alliance is calling on the Air Force to reverse its censorship and repost the colonel’s column.

“The Ohio National Guard is not free to censor the protected speech of one of its members based on the content that speech,” he said.

So if the Air Force can make an accommodation for atheists, why can’t they make one for Christians?