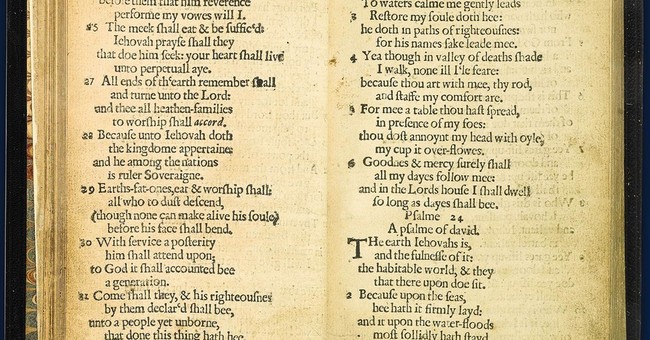 An inspirational painting that referenced a Bible verse has been removed from a dining hall at Mountain Home Air Force Base after an anti-religion group filed a complaint.

The painting featured a medieval crusader and referenced Matthew 5:9, “Blessed are the peacemakers, for they will be called children of God.”

The Military Religious Freedom Foundation called the painting “repugnant” and an “overt display of Christian nationalism.”

They allegedly received a complaint from someone at the base who said the picture made “me feel terribly uncomfortable, disheartened and disappointed.”

“I have been extremely disturbed and shocked by a clearly Christian picture of religious supremacy very prominently hanging in the dining facility of our Air Force Base, the unidentified complainant states in an email. “I and countless other Airmen were forced to look at this ‘Crusader/USAF’ painting while we ate.”

The unidentified complainant said 21 other individuals also took issue with the painting. None were identified by the MRFF.

MRFF founder Mikey Weinstein called the Pentagon Friday morning to complain about the painting and gave them one hour to comply with his demands to remove the painting. Less than an hour later the picture was removed.

Col. Christopher Short, the commander of the 366th Fighter Wing told me the art work was removed as soon as he was made aware.

“We make reasonable accommodations for all religions and celebrate the religious diversity of our Airmen,” Short said.

Short said the picture was removed to remain in compliance with the Air Force’s position outlined in the Revised Interim Guidelines Concerning Free Exercise of Religion in the Air Force.

“The document states that we will remain officially neutral regarding religious beliefs -- either officially endorsing nor disapproving any faith belief or absence of belief,” Short said.

The Military Religious Freedom Foundation touted Weinstein’s influence within the military in a column titled “The Pentagon Most Certainly Is Listening to Mikey Weinstein.”

Chris Rodda, senior research director for the MRFF wrote that the wing commander told Weinstein “that he will be ordering another inspection to rid his base of anything else like what had been hanging in the dining hall.”

Lt. Gen. Jerry Boykin (Ret.), vice president of the Family Research Council, told me the removal of the picture raises serious questions about Weinstein’s influence within the military.

“This is clearly more evidence of anti-Christian activity in the military,” Boykin said.

“What is happening (aside from sexual assault) is spiritual rape,” Weinstein told the Washington Post. “And what the Pentagon needs to understand is that it is sedition and treason. It should be punished.”

Weinstein pushed for the military to court martial anyone guilty of religious proselytizing.

“You need half a dozen court martials real quick,” he told the newspaper.

Weinstein’s remarks generated national outrage and led the military to downplay his influence in the Pentagon.

But Boykin’s said the Pentagon’s handling of the Air Force base portrait demonstrates Weinstein does in fact wield power within the military.

“There is a foundation of truth in what he told the Washington Post,” Boykin said. “He has influence. He clearly has influence within the Air Force.”

“We’ve gotten so many conflicting statements from the Pentagon,” he said. “It’s leading me to wonder what the truth is - not only about the DoD policy - but what is their relationship with Mikey Weinstein and how much influence does he have?”