Reporters Glorify Themselves Into GI Joe

Tim Graham
|
Posted: Feb 12, 2021 12:01 AM
Share   Tweet
The opinions expressed by columnists are their own and do not necessarily represent the views of Townhall.com. 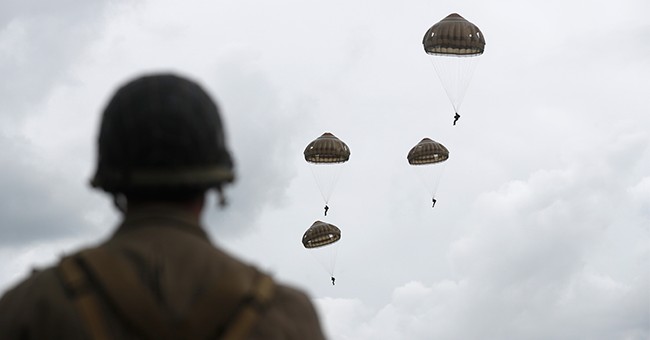 One of the easiest things to predict about the end of Donald Trump's presidency was that anti-Trump journalists would eventually feel a heated rush of nostalgia about their heroic crusade to keep democracy from dying. But it came earlier than expected.

Alexander Nazaryan of Yahoo News wrote a piece for the Democrat-endorsing website The Atlantic that was originally headlined "I Miss the Thrill of Trump." He unintentionally caused laughter when he wrote: "Covering the administration was thrilling for many journalists, in the way that I imagine storming Omaha Beach must have been for a 20-year-old fresh from the plains of Kansas. He hadn't signed up for battle, but there he was, liberating France. ... This was our Omaha Beach. I, for one, would have rather been in Hawaii."

Critics were quick to mock the idea that zinging Trump at a briefing was like the Omaha Beach scene in "Saving Private Ryan." CNN host Jim Acosta and the rest were all GI Joe with a kung-fu grip on the microphone. Reporters do risk their lives in war zones, countries with dictatorships and terrorist neighborhoods. That's what makes this kind of prose from Washington-based reporters sound so wildly exaggerated. But it ably illustrates the liberal media's overwhelming self-regard.

The article headline, which was probably not a sentiment in line with the Trump impeachment crusade, was transformed by The Atlantic into "I Was an Enemy of the People," surely meant with a wink, since The People should always be grateful for heroic journalists.

For a moment, Nazaryan expresses a desire to hold President Joe Biden accountable and laments how the new team is "crushingly on message." But mostly, there are more ridiculous historical metaphors.

"(O)utside of North Korea," Nazaryan wrote, a journalist's job is not "to lavish a country's leader with hagiographic rhetoric, although the conservative media did its best."

Somehow, Nazaryan slept through the dominant liberal media's eight years of Obamagasms. Just recall when then-CNN host Piers Morgan felt pity for then-President Obama's uglier successors. "After the perfect Barack Obama, who's a perfect physical specimen to many people's eyes, does it matter?" he asked.

Then turn back to Nazaryan, who said Trump is like Osama: "To simply point out that Trump had improbably managed to alight on the correct course of action was to have written a favorable profile of Osama bin Laden."

And like Stalin: "We should be grateful that Trump energized the profession. Is that sort of like saying that Stalinism energized interest in Siberia? Maybe, I guess."

Nazaryan is leaving these rhetorical road apples all over the internet. The Los Angeles Times assigned him to review Andy Ngo's anti-antifa book "Unmasked," and he leaped for the Nazi-propagandist metaphor: "Every act of violence by antifa, meanwhile, is described so meticulously and ominously that Herr Goebbels would have been proud."

This is nothing new for this writer. In 2016, he tweeted a black-and-white picture of Nazis with the caption "Ted Cruz has a strong ground game in Iowa."

Liberal journalists sometimes act befuddled as to why they are portrayed as wildly opinionated partisans who shouldn't get to pose as The People's representatives at press conferences. Alexander Nazaryan is making that argument very easy. No one needs to storm a beach to prove that.