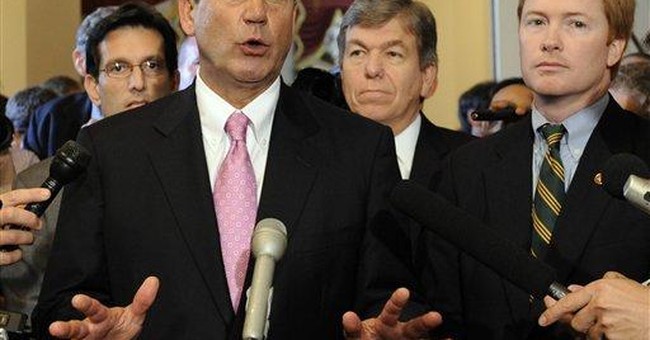 Nothing could more painfully demonstrate what is wrong with Congress than the current financial crisis.

Among the Congressional "leaders" invited to the White House to devise a bailout "solution" are the very people who have for years created the risks that have now come home to roost.

Five years ago, Barney Frank vouched for the "soundness" of Fannie Mae and Freddie Mac, and said "I do not see" any "possibility of serious financial losses to the treasury."

Moreover, he said that the federal government has "probably done too little rather than too much to push them to meet the goals of affordable housing."

Earlier this year, Senator Christopher Dodd praised Fannie Mae and Freddie Mac for "riding to the rescue" when other financial institutions were cutting back on mortgage loans. He too said that they "need to do more" to help subprime borrowers get better loans.

In other words, Congressman Frank and Senator Dodd wanted the government to push financial institutions to lend to people they would not lend to otherwise, because of the risk of default.

The idea that politicians can assess risks better than people who have spent their whole careers assessing risks should have been so obviously absurd that no one would take it seriously.

But the magic words "affordable housing" and the ugly word "redlining" led to politicians directing where loans and investments should go, with such things as the Community Reinvestment Act and various other coercions and threats.

The roots of this problem go back many years, but since the crisis to which all this led happened on George W. Bush's watch, that is enough for those who think in terms of talking points, without wanting to be confused by the facts.

In reality, President Bush tried unsuccessfully, years ago, to get Congress to create some regulatory agency to oversee Fannie Mae and Freddie Mac.

N. Gregory Mankiw, his Chairman of the Council of Economic Advisers, warned in February 2004 that expecting a government bailout if things go wrong "creates an incentive for a company to take on risk and enjoy the associated increase in return."

Since risky investments usually pay more than safer investments, the incentive is for a government-supported enterprise to take bigger risks, since they get more profit if the risks pay off and the taxpayers get stuck with the losses if not.

The government does not guarantee Fannie Mae or Freddie Mac, but the widespread assumption has been that the government would step in with a bailout to prevent chaos in financial markets.

Alan Greenspan, then head of the Federal Reserve System, made the same point in testifying before Congress in February 2004. He said: "The Federal Reserve is concerned" that Fannie Mae and Freddie Mac were using this implicit reliance on a government bailout in a crisis to take more risks, in order to "multiply the profitability of subsidized debt."

Chairman Greenspan added his voice to those urging Congress to create a "regulator with authority on a par with that of banking regulators" to reduce the riskiness of Fannie Mae and Freddie Mac, a riskiness ultimately borne by the taxpayers.

Fannie Mae and Freddie Mac do not deserve to be bailed out, but neither do workers, families and businesses deserve to be put through the economic wringer by a collapse of credit markets, such as occurred during the Great Depression of the 1930s.

Neither do the voters deserve to be deceived on the eve of an election by the notion that this is a failure of free markets that should be replaced by political micro-managing.

If Fannie Mae and Freddie Mac were free market institutions they could not have gotten away with their risky financial practices because no one would have bought their securities without the implicit assumption that the politicians would bail them out.

It would be better if no such government-supported enterprises had been created in the first place and mortgages were in fact left to the free market. This bailout creates the expectation of future bailouts.

Phasing out Fannie Mae and Freddie Mac would make much more sense than letting politicians play politics with them again, with the risk and expense being again loaded onto the taxpayers.