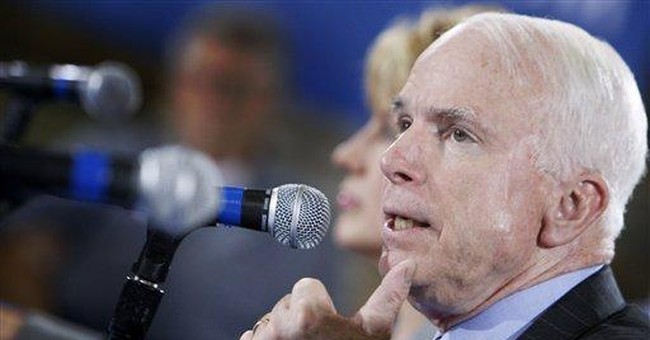 Among the painful signs of our time are the shocked reactions to Chuck Norris' raising the question of whether Senator John McCain is too old to be president.

Have we reached the point where we have so many politically correct taboos that we can't even talk sense?

Does a man in his seventies have less energy for either physical or mental tasks than someone younger? Those of us who are in our seventies know darn well that we can't do everything we used to do, as well as we used to do it.

It was appalling to me when my driver's license was renewed last year without my having to get behind the wheel of a car and demonstrate that I still could drive safely.

Even if my own driving was still all right, I could get killed by some other old-timer whose driving was not all right -- and who had not been tested behind the wheel for many years.

It is not just in physical tasks that age takes its toll. Even when our minds remain sharp, our energy levels are seldom the same, and that affects how long we can concentrate on a given day without taking a rest.

It is easy enough for me to take an afternoon nap and wake up refreshed, especially since my younger research assistants are working while I am dozing, and have plenty of material ready for me when I am ready to resume work.

But a President of the United States has to be ready to take on any crisis that arises anywhere in the world, at any hour of the day or night.

It can be a killing job. You need only look at pictures of Abraham Lincoln when he took office and compare them with the pictures of him just a few years later, when he looked like he had aged at least ten years during the Civil War.

Today we know that FDR's doctor had put him on a restricted schedule -- and that still was not enough to keep him from dying in office, just a few months after he began his final term as President.

Franklin D. Roosevelt was younger when he died than John McCain is right now. Moreover, FDR had not been abused for years as a prisoner of war.

This is no time to get squeamish or politically correct, when talking about whoever is to carry the load of the free world on his shoulders in the White House.

Quite aside from age, there is all too much evidence already that John McCain is not the kind of man who has given in-depth thought to many of the serious issues on which he shoots from the hip, which some people equate with "straight talk."

The media have dubbed him a "maverick," which is another way of spinning the fact that he is headstrong and unreliable.

Senator McCain's teaming up with Senator Ted Kennedy on immigration, and with equally left-wing Senator Russ Feingold to violate the First Amendment in the name of "campaign finance reform," are classic examples of a loose cannon.

Senator McCain is not a bad man. He has some admirable qualities. But there are plenty of good people who would be dangerous in a job for which they are not suited.

Back in the 18th century, Edmund Burke said that some people "may do the worst of things without being the worst of men." The White House is not the place for that.