Thomas P. Kilgannon
|
Posted: Sep 11, 2020 12:01 AM
Share   Tweet
The opinions expressed by columnists are their own and do not necessarily represent the views of Townhall.com. 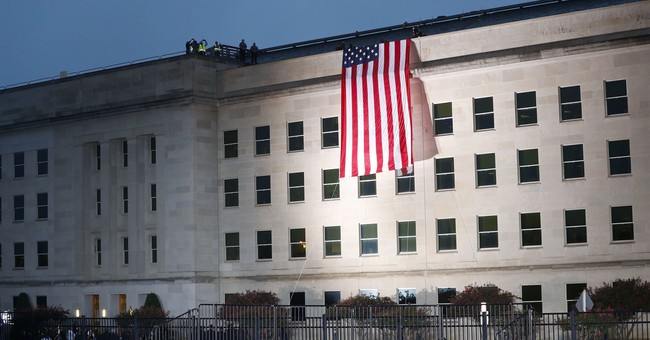 Dulles, Virginia – I had completed a business trip and was headed for home on Northwest Airlines Flight 238. Our 8:45 a.m. departure from Detroit to Reagan National was one of the last flights to take off that morning of September 11, 2001, because shortly after our ascent, all air traffic in the United States was grounded for the next two days. As we began our descent, our pilot informed the passengers that our flight had been diverted to Dulles Airport in northern Virginia. It was clear once we had landed and been informed of the terrorist attacks that the authorities didn’t want any planes over the nation’s capital.

At 8:46 that morning, one minute after my flight took off, American Airlines Flight 11 crashed into the North Tower of the World Trade Center. It was one of four terrorist-controlled aerial weapons that were used to claim the lives of 2,997 Americans in New York, Washington, D.C., and Shanksville, Pennsylvania.

The worst tragedy since Pearl Harbor brought out the best in Americans who immediately went to work wherever they were. On board United Flight 93, a group of passengers, armed with intelligence from loved ones on the ground, attacked the terrorists and prevented their plane from reaching the U.S. Capitol. At the Pentagon, hundreds of civilians and service members instantly reacted to the crash, pulling survivors from the carnage and administering first aid.

In New York, water taxi operators helped in the massive evacuation of lower Manhattan. Nurses and doctors performed heroically even as their hospitals were overwhelmed. Members of the FDNY were on the scene immediately. They began rescue operations, though 343 firefighters would not come out alive.

Nearly 1,000 members of the New York Police Department (NYPD) were at the World Trade Center within minutes. In the days and weeks after the attack, law enforcement from across the country tracked suspects, conducted investigations, prepared for potential follow-on attacks, and secured vulnerable targets.

The desire of Americans to serve and to assist was demonstrated by the long lines that formed outside of blood donation centers and military recruiting stations. Churches and charities organized volunteers, fed first responders, comforted families of the fallen, and much more.

To confront the terrorists and their sympathizers, thousands were dispatched to Afghanistan. Among them was Petty Officer 1st Class David Tapper who enlisted in the Navy after graduating high school in 1989, completed the grueling BUDS course – Basic Underwater Demolition/SEAL Training – and served for 13 years in the Navy, 12 years as a SEAL. Not only was David a SEAL, he was a member of the elite Naval Special Warfare Development Group. As such, he was among the first deployed to Afghanistan in 2001. He also deployed to Iraq for the initial operations and was a member of the team that conducted the dramatic rescue of PFC Jessica Lynch who was being held prisoner. On August 20, 2003, during a battle along the Afghanistan/Pakistan border, David lost his life.

At Freedom Alliance, we care for the men and women of our military and especially those who’ve served in the years since the attacks. We’ve provided dozens with all-terrain wheelchairs and helped many more who are struggling with the emotional wounds of war.

Among our many efforts is providing college scholarships to the children of service members killed or wounded in the defense of our country. Since 9-11, we’ve awarded scholarships to some 2,000 students, providing more than $16 million in tuition assistance.

Like her father, Talia demands excellence of herself and was a top performer at Old Dominion in both the classroom and on the soccer field. She was a two-time team captain and earned numerous recognitions including All-Conference USA Second Team and United Soccer Coaches NCAA Division I All-South Region Team. In 2018, she was named to the Conference USA Honor Roll for maintaining a GPA of at least 3.0.

Talia’s father was among the first into Afghanistan, and thousands more heroic young men and women have followed. They’ve been at war for 19 years and, sadly, too many kids like Talia won’t see their fathers again, nor will the children of the firefighters or innocent civilians who died during the attacks of September 11.

We need to keep them in our memories and honor their sacrifices by serving others in the same spirit they served us. Americans have demonstrated our potential for caring, kindness, compassion, service, sacrifice, and patriotism since 9-11. Let’s remember these heroes as our examples as we address the challenges we currently face.

Tom Kilgannon is the President of Freedom Alliance, a nonprofit organization that provides support to America’s military families and advocates for a strong national defense.