Thomas Glessner
|
Posted: Jul 26, 2021 12:01 AM
Share   Tweet
The opinions expressed by columnists are their own and do not necessarily represent the views of Townhall.com. 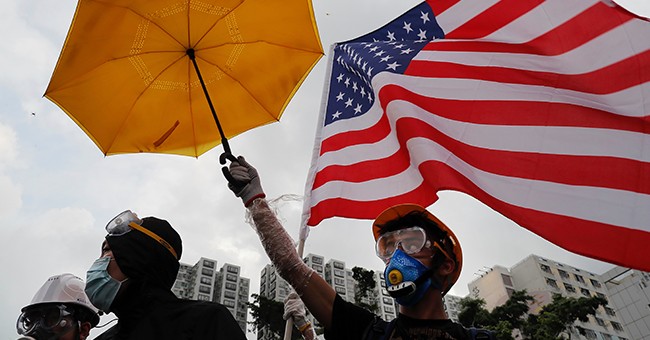 Recent contrasting events issue a dire warning. We are in a battle between the woke culture that seeks to divide Americans and those who celebrate our nation as a beacon of light to the world.

As Americans celebrated July Fourth, certain politicians and celebrities that subscribe to “wokeism” displayed hostility towards our nation and our flag. In contrast, Cuban protestors recently displayed the American flag in a show of honor as they marched against the tyranny of their communist government. If the woke movement fails to heed this important message, the future of our American republic may be on the line.

Meanwhile, also in July, communist China celebrated its 100th anniversary – a century of oppression, murder and torture for millions of Chinese citizens. China’s brutal 2020 crackdown on pro-freedom citizens in Hong Kong revealed its true nature to all who have open minds and eyes to see. It is important to note that the protesters in Hong Kong were also carrying American flags.

The Cuban and Hong Kong freedom fighters are showing solidarity with America. They understand what America stands for. They see our flag as a symbol of the highest of human ideals and aspirations.

Not so for the woke culture that sees America as an evil nation founded upon racism and oppression. This movement divides America into two classes based upon race – oppressors and the oppressed. The woke movement seeks to cancel culture through various actions including the teaching of critical race theory to children in schools. It seeks to reeducate those teachers who resist such racist indoctrination and ultimately it seeks to abolish our educational system replacing it with a new system that teaches hatred toward America.

While Cuban freedom fighters stand bravely for their human rights, woke cultural leaders voice support for their oppressors. Bernie Sanders, the patron saint of the woke movement, has praised the murderous regime of Cuba because Castro increased the literacy rate of the Cuban people. Likewise, Black Lives Matter and other factions have defended the oppression of current Cuban leaders, saying that the sufferings of their people are due to American actions.

America is not a perfect nation. In the spirit of our Constitution, we work to “achieve a more perfect union.” The greatness of America is that we strive for perfection and work to eliminate injustices. Unlike China and Cuba, our nation was founded upon the eternal truth that all human beings are created equal, with inalienable rights from God. Our Constitution codifies this in the law through the Bill of Rights and other provisions such as the Thirteenth and Fourteenth Amendments.

Despite its flaws, America remains the most prosperous nation in the history of the world. Americans enjoy more individual freedom than any other nation has ever experienced. The American ideals set forth in the Declaration of Independence and in our Constitution have resulted in a nation where individuals are valued and given the opportunity to rise to their highest level of achievement, thereby truly pursuing happiness.

Every individual in America is accorded equality and opportunity under the law.  This is what the oppressed in other nations see and covet. It is what the protesters in Cuba and Hong Kong desire. It is an inspiration for the world.

The brave protesters in Hong Kong and Cuba would sacrifice their lives to achieve the freedoms that we enjoy. Thousands of our best have sacrificed their lives to maintain America as the beacon of freedom to the rest of the world. Old Glory symbolizes this.

The protesters of Marxist oppression in China and Cuba know this full well. Those Americans who proclaim to be woke do not. The mentality of the woke movement leads to division, class warfare and the eventual end of the American republic. What will arise to replace it will be the Marxist systems being protested in Cuba and Hong Kong and supported by woke leaders.

Our nation is at a crossroads. Will we affirm the proclamations of the freedom fighters of Cuba and Hong Kong? Will Old Glory continue to inspire these defenders of liberty and others like them around the world?

Time will tell. In the meantime, America and its flag are an inspiration for these courageous warriors. However, they are also a great inspiration to us. They serve as an important reminder of what we stand to lose if “wokeism” has its way.