Terry Paulson
|
Posted: Feb 29, 2016 9:25 AM
Share   Tweet
The opinions expressed by columnists are their own and do not necessarily represent the views of Townhall.com. 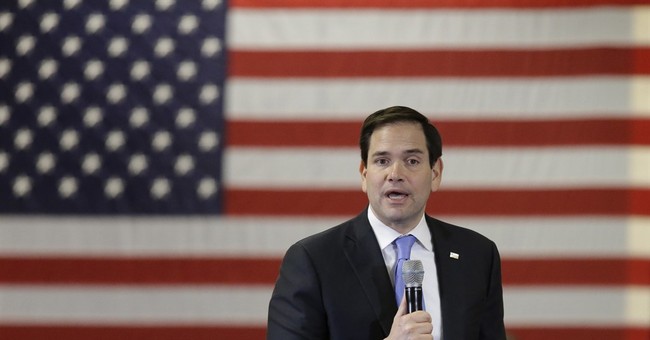 It’s time for Republicans to step up to the challenge of supporting a candidate that can win. Too many seem to have bought the “story” that they need an “outsider” to right the wrongs of the “establishment” Republicans in Washington.

As a Republican voter, that “establishment” is you. You elected these men and women who have taken back the Senate and control the House. Many of them were “outsiders” when you elected them. Collectively, we’ve set the stage for change in Washington. It’s time to give the “establishment” we elected a president who can work with them to change the course of our future.

Yes, you’re probably as mad as I am. We’re mad and frustrated by a president who has taken America on a radical turn to the left through partisan politics and an aggressive use of executive action. He’s vetoed every attempt by Republicans to bring sanity back to Washington. Like you, I can’t wait to give America a new president who can work with the “establishment” Republicans you elected to reverse Obama’s liberal assault on America.

First, a moment of appreciation for Donald Trump. He’s certainly dealt a death blow to political correctness and has given voice to those who are tired of watching the America they love slide toward socialism.

But does Trump have the temperament and experience necessary to lead a country, rally allies, defeat radical Islamic terrorists, and bring people together? No! This man is a divider, a disrupter, an attacker, and a publicity-driven narcissist. If Trump wins, the very party he is supposed to support will be demoralized and forced to support a candidate who has the most “unfavorable” ratings of any candidate in modern campaign history.

The Republican “establishment” he blasts daily is the very one that will depend on him to help them hold the Senate and the House. In normal circumstances, political parties adjust their platform to their nominee’s agenda. But in Trump, you have a front-runner that’s all rhetoric and no substance. Go to his website, and you’ll be hard pressed to find specifics. At a time when the GOP needs clarity and focus behind a platform that unites the party, Paul Ryan and Mitch McConnell will have to search for common ground with a man who has demonized his own party’s leaders and many of its core positions.

It’s time for Trump supporters to consider changing horses in this race. One of the strongest concentrations of Marco Rubio’s support comes from voters who said that electability in November was the most important factor in their choice. In the South Carolina primary, only 15 percent chose that attribute as their number one factor, but Rubio won 47 percent of those votes. Why isn’t electability the number one factor for all GOP voters? Wake up. Losers don’t legislate, and they don’t nominate Supreme Court Justices.

Public Policy Polling, reporting on the GOP race, asserts: “In a one on one with either Cruz or Rubio things get a lot tougher for Trump. He leads Cruz only 43/42, and trails Rubio 49/43 one-on-one. Rubio wins over supporters of Cruz (73/25), Kasich (64/17), Bush (61/24), and Carson (48/38) overwhelmingly if the field gets down to the two of them. A one-on-one race may be the only thing that can actually stop Trump. Rubio's the most viable challenger to Trump because he's the most popular of the three serious candidates.”

In head to head polls against Hillary Clinton, Hillary trumps Trump by a RealClear Politics average of 2.8 percent (Trump winning only in the USA Today/Suffolk Poll by 2 percent). In the same report, Marco Rubio beats Hillary in all four polls listed with RealClear Politics by an average of 4.7 percent.

Obviously, there are many worthy candidates remaining; in fact, too many! But ego and hope seem to make them unwilling to withdraw from the race. It’s time for voters to take a bold move.

On Super Tuesday, pretend that all but two are gone. On that one day, make it a race between Donald Trump and Marco Rubio. Give the “establishment” senators and congressmen an opportunity to prove that they can deliver on what you sent them there to accomplish. Prove to them and to yourself that giving them a President they can work with means more to you than giving voice to your anger or going with the crowd. On Tuesday, vote for Marco Rubio, a unifier, ready to “truly” make America great again.