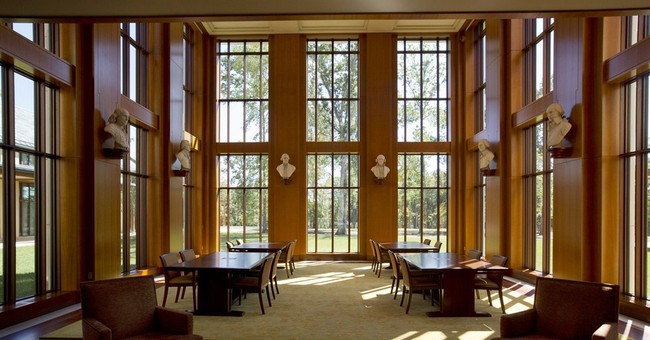 In Oh, God, that engaging and thought-provoking comedy, John Denver played the part of a grocery store manager who was visited by God in the form of George Burns, as a senior citizen with an attitude. His mission was to change the world.

Approaching July 4th, permit me to imagine a similar encounter with some Founding Fathers. After reading one of my columns, they come to help me do a better job of saving our country from debt, dependence and eventual tyranny.

Paulson: "Why are you coming to me? I just write a column. Why don't you show up in Washington at one of the presidential news conferences?"

Franklin: "They wouldn't listen. We have to reach the people. It was 'We the People' who made the difference in establishing this republic. They can do it again."

Jefferson: "Besides, we've been reading your columns. At times you get it right. We've come to add some weight to your writing. We want you to use our words, not yours."

Franklin: "We're good with words. The quotations you use will need to ring true with what we've already said. So let's start men!"

Adams: "The debt is out of control. Government is way too big...."

Franklin: "We saw what such policies can do. I saw what the out-of-control welfare system of King George did to England. Their system centered on 'a solemn general law made by the rich to subject their estates to a heavy tax for the support of the poor.' As a result, there was no country in the world in which the poor were more idle, dissolute, drunken, and insolent. In America, our system of government was committed to not making the poor easy in poverty, but leading or driving them out of it. By offering a premium for the encouragement of idleness, the English system engendered an increase in poverty."

Jefferson: "If this continues, our democracy will cease to exist when you take away from those who are willing to work and give to those who would not."

Madison: "If Congress can employ money indefinitely to the general welfare, the powers of Congress would subvert the very foundation, the very nature of limited government established by the people of America."

Adams: "The moment the idea is admitted into society that property is not as sacred as the laws of God, and that there is not a force of law and public justice to protect it, anarchy and tyranny commence."

Paulson: "You're talking about things that are no longer popular--God, property rights, limited government, not providing welfare. It's no longer equal rights; it's equal outcomes. Citizens today are owed a 'fair' salary and subsidized healthcare. There are more women on food stamps than women working full time. Our economic recovery is anemic because small businesses are over-regulated and over-taxed."

Jefferson: "I place economy among the first and more important virtues and public debt as the greatest of dangers. To preserve our independence, we must not let our rulers load us with perpetual debt."

Paulson: "Our debt is over $17 trillion and growing, and that doesn't even cover the unfunded pension and entitlement debt that no one wants to face."

Franklin: "That's why we had to come."

Jefferson: "The principle of spending money to be paid by future generations under the name of funding is but swindling futurity on a large scale."

Paulson: "I wish more could be here to listen to you. I wish more even remembered history and the price you paid to give us a country like no other."

Adams: "You'll tell them what we've said in one of your columns?"

Paulson: "Certainly, but if they don't listen, would you visit them? Hearing your words reminds me what Ronald Reagan kept saying--our freedoms must be fought for and earned in every generation."

Jefferson: "I told you we should have brought Reagan with us."

Franklin: "Too young, and he was an actor for Poor Richard's sake!"

If your protest blocks and attacks a car, you’re going to get run down
Hotair
Opinion: The Steps Towards Revolution or Hostile Takeover From Within (Part II, What Is Happening?)
Redstate