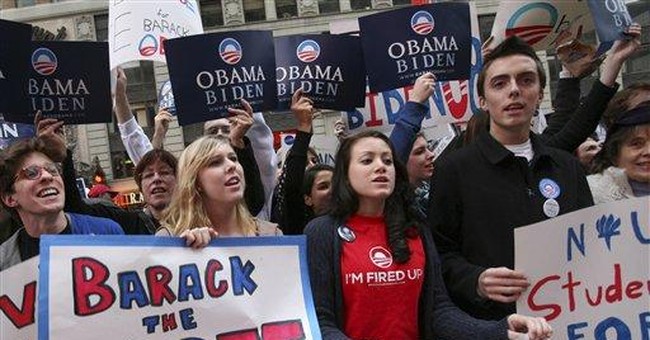 Even in defeat, I'm still proud to be an American! Those who call America "the Great Satan" must now explain how Barack Hussein Obama could become president. This young black man from humble origins worked hard to achieve success and advanced degrees, shaped a compelling mission and belief in himself and his country, and then went on to run a disciplined and inspiring campaign that received the votes of over 53% of Americans. No "Great Satan" would allow such a thing, but a great country could!

In America, you don't need to overthrow the government to take the White House. George and Laura Bush will leave and Barack and Michelle Obama will move in. They'll shake hands and exchange pleasantries, for the American story isn't a movie with one happy ending. It's one of the longest-playing and impressive soap operas to ever play on the world stage—"As America Turns." One season ends and a new cast of characters launches a new episode full of promise and challenges that are guaranteed to keep our attention.

Obama didn't earn my vote, but he'll be my president. As part of the loyal opposition, I'll support him where I can and challenge him where I must. When I disagree, I'll try to do so with civility and respect. Name calling doesn't persuade; it polarizes. Disagreements will come, but, today, we can celebrate our shared American blessings.

Martin Luther King's dream has taken flight! The divisive age of affirmative action can now give way to a glorious age of affirmative examples. We've had minorities become CEOs, Supreme Court justices, senators, and attain every category of professional excellence, but there's always that lingering doubt that when white Americans would vote behind a curtain, their racial biases would always reject a black American president. That myth has died! As with many other Americans, I celebrate that a black American has earned the right to lead this country. He didn't need extra illegal votes or a Supreme Court decision; he broke through with a decisive victory! I would have preferred Condoleezza Rice, but Barack Obama will have to do! May minority Americans now take heart that the American Dream is for them and white America isn't your enemy. Follow Obama’s example; get busy bettering yourself, excelling in school and applying your God-given talents.

Now Obama's campaigning gives way to governing in very challenging times. Our enemies have viewed Obama's presidency as a victory, but he's promised to stand strong against our enemies and refocus our Gulf War strategy. When tested, we must support such efforts. He's also challenged by a deepening economic crisis complicated by unprecedented national debt, growing credit-card defaults and mortgage foreclosures, and aging baby boomers who threaten to take the unfunded Medicare and Social Security entitlements into insolvency.

With a Democrat controlled Senate and Congress, he'll be expected to deliver on his promises, but the cupboard is bare. He expects "the rich" to shoulder more of the cost, but they're struggling as well. States like California who depend heavily on income tax revenue are rapidly spiraling into deeper debt. Presidents learn that unrealistic expectations can damage popularity quickly, but he's earned the opportunity to prove that Democrats can deliver.

I compliment John McCain and Sarah Palin for their spirited and principled campaign. Facing a weakened economy, an unpopular war, a tarnished Republican brand, a continuing financial crisis and biased media coverage, they delivered enough votes to win most presidential elections. For Republicans, there's still room for optimism. Election-day surveys indicate that more Americans view themselves as conservative than liberal. Unfortunately, those same polls indicate that more identify themselves as Democrats than as Republicans. The Republican brand has been tarnished, but as some leaders go to the sidelines, emerging stars like Governors Sarah Palin and Louisiana’s Bobby Jindal take the stage. They’re communicators and leaders of action who’ll have to sell a conservative vision and reearn America’s trust. Ronald Reagan wasn’t just a great communicator; he was a great educator. Republicans must reclaim that mission on the road to the mid-term elections.

Why do I remain optimistic? Our coins read, "In God We Trust." I share that belief. God's will is revealed in His way and His time—not mine! A Biblical verse written by Apostle Peter provides perspective: "Humble yourselves, therefore, under God's mighty hand, that he may lift you up in due time. Cast all your anxiety on him because he cares for you." To the dismay of many secular readers, I find peace believing that God is still in control, even in the tough times. Saint Ignatius wrote: "Pray as if everything depends on God, but act as if everything depends on you." There’s much to be done together to help invent our future. Attacking each other or giving in to despair won’t help. Stay engaged. Share your opinions. Make a difference where you can. Be proud to be an American.