Terry Jeffrey
|
Posted: Aug 29, 2018 12:01 AM
Share   Tweet
The opinions expressed by columnists are their own and do not necessarily represent the views of Townhall.com. 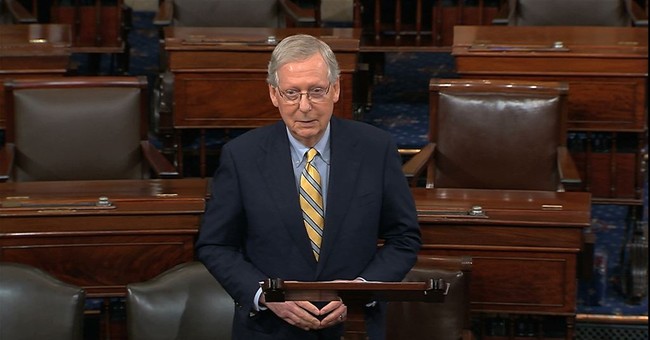 Senate Appropriations Chairman Richard Shelby, R.-Ala., applauded the Senate's passage of this and previous spending bills as a triumph of bipartisanship.

"I think it shows what the Senate can do when we work together, and I hope we can continue on this path," he said.

Their aim was to fix the process for moving spending bills through the Senate.

Later on the Senate floor, Shelby and Leahy would indicate they had made a deal on how to move spending bills on a bipartisan basis.

"Senator Leahy and I have known each other for many decades now," Shelby said on June 19. "In fact, our combined years on the Appropriations Committee exceed the ages of many of our colleagues.

"On this basis, we came together at the outset of the process and determined that only by uniting would appropriations bills make it to the Senate floor and beyond. He and I made a deal, the essence of which Politico succinctly summarized in the headline of a recent article entitled 'Poison Pills Banished From Senate Spending Bills.' That is what we hope. As part of this deal, Vice Chairman Leahy and I agreed to reject not only partisan riders -- our own, too -- but also new authorizations in the 2019 appropriations bills."

When the combined Defense-Labor-HHS-Education spending bill came up on the Senate floor on Aug. 23, Leahy reiterated what Shelby had said.

"We are proving that when we put partisan politics aside, we can do the work of the American people," Leahy said. "This progress would not have been possible without my dear friend, the chair of the Appropriations Committee, Senator Richard Shelby. Senator Shelby and I made a commitment, along with Leader McConnell and Leader Schumer, to only move forward on appropriations bills that have bipartisan support, are at spending levels agreed to in the bipartisan budget deal, and that reject poison pill riders and controversial authorizing language."

So, what do these "bipartisan" Senate leaders consider a "poison pill"?

The other says, "None of the funds made available by this Act may be used to conduct or support research using human fetal tissue if such tissue is obtained pursuant to an induced abortion."

The Labor-HHS-Education bill the Senate Appropriations Committee approved in June -- and the full Senate approved last week -- included neither of these pro-life provisions.

As reported by this writer at CNSNews.com last week, a Senate aide said: "The chairman has been successful in passing appropriations bills because he and the vice chairman have honored their agreement not to include provisions in these bills that either side considers poison pills. Appropriations bills have included partisan riders in recent years, and they have gone nowhere as a result. That's how we've ended up with the same massive omnibus spending bills that everyone dislikes."

So, defunding Planned Parenthood and denying federal tax dollars to researchers who use aborted-baby parts are "poison pills."

This means that a senator who is morally opposed to providing tax dollars to the nation's largest abortion provider and researchers who use aborted-baby parts -- which the Labor-HHS-Education bill would permit -- would be forced to vote against the Defense bill as well.

Sen. Rand Paul, R.-Ky., fought to bring up an amendment to this combined bill that would defund Planned Parenthood. After he spoke out on the Senate floor, his amendment was allowed a vote -- but on a procedure that required it to get 60 votes. It lost 45-48.

Sen. Jeff Flake, R.-Ariz., by contrast, offered an amendment to the Defense part of the bill that said, "None of the amounts appropriated or otherwise made available by this Act may be obligated or expended for the development of a beerbot or other robot bartender." This was gathered into a group of amendments called the "managers' package."

"I do appreciate the Appropriations Committee's willingness to consider including my amendment to prohibit further Pentagon funding of robot bartenders in the managers' package," Flake said on the floor. "I hope it stays in the package. At the very least, this may be the last call for the beerbots."

Immediately after the Senate voted against Paul's amendment to defund Planned Parenthood, it accepted the managers' package -- including the beerbot ban -- without opposition.