Terry Jeffrey
|
Posted: Sep 07, 2016 12:01 AM
Share   Tweet
The opinions expressed by columnists are their own and do not necessarily represent the views of Townhall.com. 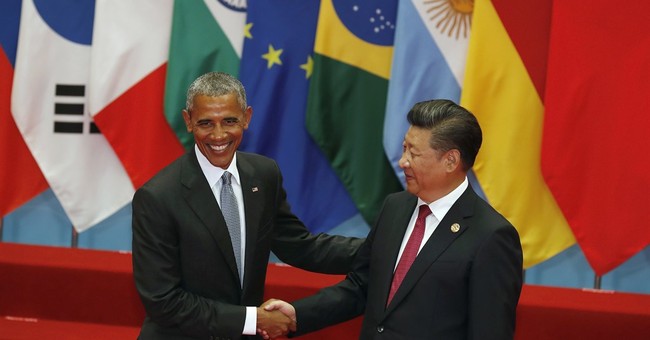 The purpose of the meeting? The Communist leader and the president handed over to the secretary general documents declaring their nations were officially joining the Paris Agreement on climate change.

The agreement itself describes such documents as "instruments of ratification, acceptance, approval or accession."

Obama did not ask the Senate to ratify this agreement by the two-thirds vote our Constitution requires of treaties.

So to what did Obama - alone -- commit this nation?

The Sunday New York Times described the varying U.S. and Chinese commitments to this project as follows: "They include a promise for China's carbon emissions to reach a plateau or decline 'around 2030,' but without any specific target for reductions like those Mr. Obama pledged for the United States (between 26 and 28 percent of 2005 levels by 2025). That means China has plenty of room to continue burning fossil fuels to power its economy."

Obama, nonetheless, described his unilateral approval of the Paris Agreement as a personal triumph -- that could save the Earth.

"One of the reasons I ran for this office was to make sure that America does its part to protect this planet for future generations," Obama said, according to the White House transcript of his remarks.

"Over the past seven and a half years, we've transformed the United States into a global leader in the fight against climate change," he said.

"And someday we may see this as the moment that we finally decided to save our planet," he said.

So, what does the People's Republic do with people?

"The government restricted the rights of parents to choose the number of children they have," the State Department said in its latest human rights report on China.

"Intense pressure to meet birth-limitation targets set by government regulations resulted in instances of local family-planning officials using physical coercion to meet government goals," said State. "Such practices included the mandatory use of birth control and the forced abortion of unauthorized pregnancies. In the case of families that already had two children, one parent was often required to undergo sterilization."

Chinese families that have a child without government approval can be subject to what amounts to a 1,000-percent income tax.

"The law requires each parent of an unapproved child to pay a 'social compensation fee' that could reach 10 times a person's annual disposable income," said the State Department.

One of Obama's top advisers on climate change is John P. Holdren, director of the White House Office of Science and Technology Policy.

In 1973, as this column has noted before, Holdren joined Paul and Anne Ehrlich -- authors of "The Population Bomb" -- in writing "Human Ecology: Problems and Solutions." The co-authors saw three sources for environmental degradation: people, affluence and technology.

"The relation," they wrote, "can be written as a mathematical equation: total environment damage equals population, times the level of material affluence per person, times the environmental damage done by the technology we use to supply each bit of affluence."

"Halting population growth must be done, but that alone would not be enough," Holdren and his co-authors wrote. "Stabilizing or reducing the per capita consumption of resources in the United States is necessary, but not sufficient. Attempts to reduce technology's impact on the environment are essential, but ultimately will be futile if population and affluence grow unchecked. Clearly, if there is to be any chance of success, simultaneous attacks must be mounted on all the components of the problem."

In their conclusion, Holdren and the Ehrlichs said: "Political pressure must be applied immediately to induce the United States government to assume its responsibility to halt the growth of the American population."

"A massive campaign must be launched to restore a high-quality environment in North America and to de-develop the United States," they said.

"Redistribution of wealth both within and among nations is absolutely essential, if a decent life is to be provided for every human being," Holdren and his co-authors wrote.

Forty-three years later, with Holdren serving as White House science adviser, Obama took the Little Sisters of the Poor all the way to the Supreme Court in an effort to ensure that their employee health care plan would cover abortion-inducing drugs and devices.

And on Saturday, in China, President Obama said of his climate change agreement: "Someday we may see this as the moment that we finally decided to save our planet."