Obama's Vision of America -- Brought to You From Cuba

Terry Jeffrey
|
Posted: Mar 23, 2016 12:01 AM
Share   Tweet
The opinions expressed by columnists are their own and do not necessarily represent the views of Townhall.com. 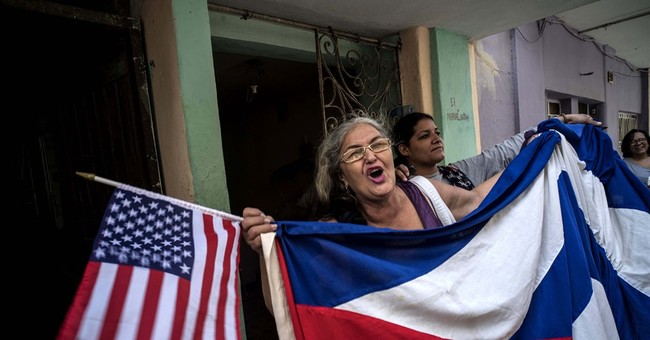 Trending
The United States of America was verbally assaulted this week from Cuban soil -- by our own president.

"Cuba," the State Department said in its latest human rights report, "is an authoritarian state led by Raul Castro, who is president of the council of state and council of ministers, Communist Party first secretary, and commander in chief of security forces."

Yet in public appearances in this "authoritarian state" -- where he was a guest of the "Communist Party first secretary" -- President Obama criticized the United States.

In a press conference with Castro on Monday, Obama welcomed the communist leader's attacks on America's economic and human rights records.

"But as you heard, President Castro has also addressed what he views as shortcomings in the United States around basic needs for people, and poverty and inequality and race relations," Obama said. "And we welcome that constructive dialogue as well -- because we believe that when we share our deepest beliefs and ideas with an attitude of mutual respect, that we can both learn and make the lives of our people better."

In a speech delivered Tuesday in Havana, Obama painted a fraudulent picture of moral equivalence between the United States and Communist Cuba.

"The Cuban Revolution took place the same year that my father came to the United States from Kenya. The Bay of Pigs took place the year that I was born," said Obama. "The next year, the entire world held its breath, watching our two countries, as humanity came as close as we ever have to the horror of nuclear war."

Obama referred here to the Cuban missile crisis. That crisis took place when the Soviet Union -- an atheistic communist power with global hegemonic ambitions -- sought to deploy nuclear missiles in Communist Cuba. Those missiles would have targeted the United States from 90 miles off our shore.

President John F. Kennedy, a Democrat and a patriot, refused to allow the Soviets to deploy those missiles.

That was a confrontation the United States won -- without firing a shot.

"As the decades rolled by, our governments settled into a seemingly endless confrontation, fighting battles through proxies," Obama continued. "In a world that remade itself time and again, one constant was the conflict between the United States and Cuba."

What does Obama mean that "our governments" fought "battles through proxies?"

The State Department's 1982 report on "Patterns of International Terrorism" succinctly described who was fighting proxy wars and for what ends.

"In its efforts to promote armed revolution by leftist forces in Latin America, Cuba supports organizations and groups that use terrorism to undermine existing regimes," the State Department said. "In cooperation with the Soviets, the Cubans have facilitated the movement of people and weapons into Central and South America and have directly provided funding, training, arms, safe haven, and advice to a wide variety of guerrilla groups, and individual terrorists."

What the Soviets and the Castro regime sought through "proxies" was the spread of Communism in the Americas.

Twenty-nine years ago, when Reagan stood at the Brandenburg Gate, he pointed to a liberating force he argued was more powerful than the Berlin Wall and the Communism it represented. That liberating force was symbolized by the cross that appeared on an East Berlin television tower whenever the sun shone upon it.

"Perhaps this gets to the root of the matter, to the most fundamental distinction of all between East and West," said Reagan. "The totalitarian world produces backwardness because it does such violence to the spirit, thwarting the human impulse to create, to enjoy, to worship."

In Havana, Obama declared that the American Revolution, the Cuban revolution and virtually all other revolutions are based on the same ideals.

"The ideals that are the starting point for every revolution -- America's revolution, Cuba's revolution, the liberation movements around the world -- those ideals find their truest expression, I believe, in democracy," Obama said.

The American Revolution started with a declaration that God endows all of men with inalienable rights. Castro's revolution has crushed the God-given rights of the Cuban people for more than half a century.

It is profoundly symbolic that the first act Obama's administration will take upon his return from Castro's Cuba is to argue in the Supreme Court that the administration can force Catholic nuns, schools and dioceses to cooperate in its plan to distribute abortion-inducing drugs and devices that take innocent life.