How Bush Empowered Obama to Erode the Constitution 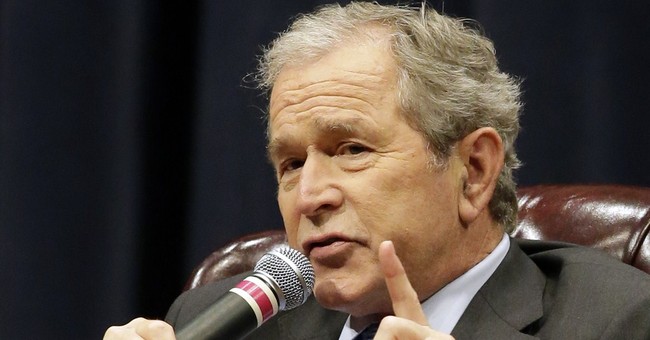 In 2002, President George W. Bush signed a law he did not intend to fully obey.

Thus, a Republican president set in motion a chain of events that allowed a Democratic president to claim, and an activist liberal Supreme Court to affirm, that the president has a unilateral power in foreign policy that the Framers did not envision and that is not consistent with representative government.

When he took office in 2001, Bush placed his hand on a Bible and swore to "preserve, protect and defend the Constitution."

Article 2 Section 3 of that Constitution commanded Bush to "take care that the laws be faithfully executed."

A year and a half later, Congress passed the Foreign Relations Authorization Act for 2003.

Section 214 of that act included a mandate: "For purposes of the registration of birth, certification of nationality, or issuance of a passport of a United States citizen born in the city of Jerusalem, the Secretary [of State] shall, upon the request of the citizen or the citizen's legal guardian, record the place of birth as Israel."

But as he did so, he released a statement declaring that part of the law he was signing (the Jerusalem-Israel passport mandate) was not consistent with his interpretation of the Constitution he had sworn to defend.

As a consequence, Bush did not intend to faithfully execute the law he had signed.

"Section 214, concerning Jerusalem, impermissibly interferes with the president's constitutional authority to conduct the nation's foreign affairs and to supervise the unitary executive branch," Bush said. "Moreover, the purported direction in section 214 would, if construed as mandatory rather than advisory, impermissibly interfere with the president's constitutional authority to formulate the position of the United States, speak for the nation in international affairs, and determine the terms on which recognition is given to foreign states."

In concluding his statement, Bush claimed for the president unilateral control of the nation's foreign policy.

"Given the Constitution's commitment to the presidency of the authority to conduct the nation's foreign affairs," said Bush, "the executive branch shall construe such policy statements [in the law] as advisory, giving them due weight that comity between the legislative and executive branches should require, to the extent consistent with U.S. foreign policy."

But does the Constitution truly give the president exclusive authority over U.S. foreign policy?

Here the Constitution says: "Congress shall have power to lay and collect ... duties ... to pay the debts and provide for the common defense."

It gives Congress the power to "regulate commerce with foreign nations," "establish an uniform rule of naturalization," "regulate the value ... of foreign coin," "define and punish piracies and felonies committed on the high seas, and offences against the law of nations," "declare war, grant letters of marque and reprisal, and make rules concerning captures on land and water," "raise and support armies," "provide and maintain a Navy," and "make rules for the government and regulation of the land and naval forces."

By contrast, Article 2, Section 3 mandates that the president "shall receive ambassadors and other public ministers."

Does this give the president unilateral power over foreign policy -- or even over the recognition of foreign governments?

Alexander Hamilton did not think so.

In Federalist No. 69, Hamilton explained how an American president was not a king, that his foreign-policy powers were constitutionally circumscribed, and that his mandate to "receive ambassadors" should not be construed as a significant grant of power.

"The president is also to be authorized to receive ambassadors and other public ministers," wrote Hamilton. "This, though it has been a rich theme of declamation, is more a matter of dignity than of authority. It is a circumstance which will be without consequence in the administration of the government; and it was far more convenient that it should be arranged in this manner, than that there should be a necessity of convening the legislature, or one of its branches, upon every arrival of a foreign minister, though it were merely to take the place of a departed predecessor."

By contrast, Hamilton noted, the president could appoint ambassadors only "with the advice and consent of the Senate," could only make a treaty "provided two thirds of the senators present concur," and he could not start a war.

But Alexander Hamilton does not serve on our current Supreme Court.

This week, in an opinion written by Justice Anthony Kennedy, the court ruled that the president has unilateral power to recognize foreign nations. It further ruled that, because of this, the president may sweep aside the law that says the State Department must say on a passport that a U.S. citizen born in Jerusalem was born in Israel if that citizen or his parents so request.

Chief Justice John Roberts dissented from the 6-3 decision, and this time he got it right.

"Today's decision is a first," Roberts said. "Never before has this court accepted a president's direct defiance of an act of Congress in the field of foreign affairs."