The Obama-Boehner-McConnell 'Fast Track' to a Poorer America 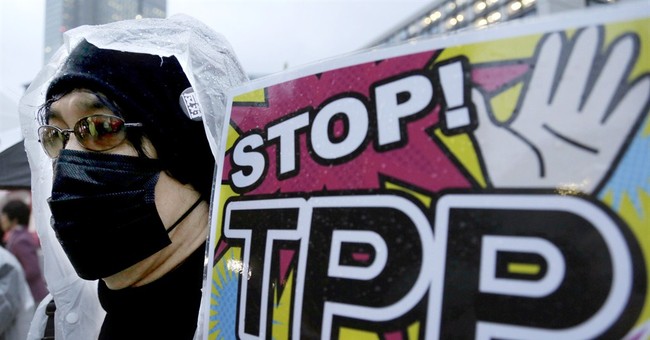 President Barack Obama is negotiating a multilateral trade agreement with the governments of 11 nations. These include Malaysia and Vietnam -- as well as Japan, Brunei, Australia, Singapore, New Zealand, Canada, Mexico, Chile and Peru.

This so-called Trans-Pacific Partnership would govern most of the commercial relations between the nations that sign it.

"With over 20 chapters under negotiation," explains a Congressional Research Service report published in March, "the TPP partners envision the agreement to be 'comprehensive and high-standard,' in that they seek to eliminate tariffs and nontariff barriers to trade in goods, services, and agriculture, and to establish or expand rules on a wide range of issues including intellectual property rights, foreign direct investment and other trade-related issues."

The Obama administration has granted the draft of this massive deal more secrecy than a Hillary Clinton email. Documents related to it are classified, and members of Congress can review them in a secured room.

Fast-track legislation would allow Obama to avoid presenting the 12-nation deal to the Senate as a treaty -- which, under our Constitution, would require a two-thirds vote of all senators present. Instead, it allows him to present it to both houses of Congress for a simple majority vote -- with no amendments allowed.

Our prospective "free-trade" partner Vietnam, according to Obama's State Department, is "an authoritarian state ruled by a single party, the Communist Party of Vietnam."

This Obama-Malaysia-Vietnam deal that Boehner-McConnell want to fast track through Congress raises many questions. The most obvious: Is there any such thing as free trade with unfree countries?

"In the context of the current TPP negotiations, the SOE presence in Vietnam -- estimated to represent 40 percent of output -- may warrant particular attention, although Malaysia and Singapore also have important SOE sectors," says the report.

But it will likely do something worse than that. It will put American workers into competition with nominally American companies that move more of their capital and jobs abroad -- where they will be able to exploit cheap labor in less-than-free countries and evade the often-excessive U.S. regulation and taxation Obama himself advances.

In America, there is a sharp dividing line between private businesses. On one side are capitalist enterprises owned by families, individuals and small partnerships of individuals. On the other are big businesses -- public-stock companies -- run by professional managers in the theoretical interest of diffuse bodies of stockholders.

Families and individuals who own businesses are free to run them according to their own values. And, yes, making a profit is clearly one of those values. But a family that owns a business might sometimes decide to forego a measure of profit in favor of the well-being of their friends, neighbors and country.

They may decide that love of country and love of God trumps love of money.

But for publicly owned big businesses -- that are not controlled by the moral values of an individual or family owner -- the pursuit of ever-higher profit is the highest good. If the only bottom line governing business decisions is the financial bottom line, it might make sense to manufacture a drug or device that, say, kills an unborn child.

Or, no matter what you make, move your jobs to Vietnam or Mexico.

"Ford Motor Co. on Friday made official a $2.5 billion investment in Mexico for two new plants and an expansion of a diesel engine line that will create about 3,800 jobs," the Detroit News reported last month.

Obama, Boehner and McConnell are on the same side of this issue. It is the wrong side.