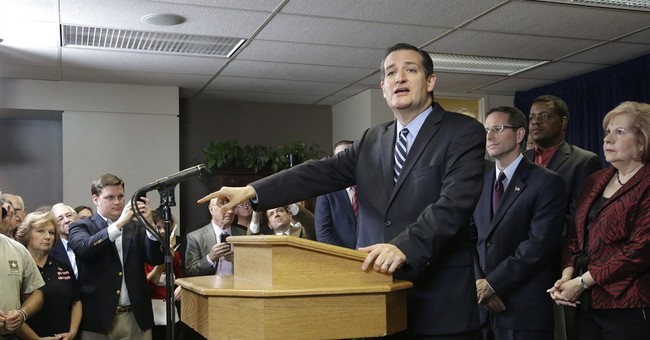 This is the story of how a simple act by Sen. Ted Cruz exposed the hatred many members of the U.S. Senate have for your freedom to speak.

The story begins in 2009 in the United States Supreme Court where Deputy Solicitor General Malcolm Stewart presented the Obama administration's interpretation of the relevant part of the First Amendment.

In case you have not read it recently, that amendment says: "Congress shall make no law respecting an establishment of religion, or prohibiting the free exercise thereof; or abridging the freedom of speech, or of the press; or the right of the people peaceably to assemble, and to petition the Government for a redress of grievances."

In the case in question -- Citizens United v. Federal Election Commission -- Stewart argued that the government could prohibit a family from sitting down in its own house, turning on its own television and watching a particular on-demand documentary.

The documentary was about Hillary Clinton -- who in the view of the liberal establishment belongs to a species (left-wing politicians) that ought to be protected from other people's speech.

Stewart argued that because the documentary was produced by a corporation and because people could watch it at a time when Clinton was running for office and because it might influence people to vote against her, the government ought to be able to prohibit the corporation from producing it.

Chief Justice John Roberts cornered Stewart on the question of whether the administration believed that -- applying the same argument -- it could also ban a book.

"Yes, our position would be that the corporation could be required to use PAC [Political Action Committee] funds rather than general treasury funds," said Stewart.

"And if they didn't, you could ban it?" asked Roberts.

"If they didn't," said Stewart, "we could prohibit the publication of the book using the corporate treasury funds."

Earlier in the argument, Justice Samuel Alito had induced Stewart to state what the Obama administration meant by a "media exemption" from its presumed power to ban political speech.

"The government's position is that the First Amendment allows the banning of a book if it's published by a corporation?" asked Alito.

"Because the First Amendment refers both to freedom of speech and of the press," Stewart responded, ""there would be a potential argument that media corporations, the institutional press, would have a greater First Amendment right."

Stated plainly, the Obama administration believes the Washington Post, a for-profit corporation, might have a right to publish a book weighing the merits of a politician but that coal-mining company or a family-owned grocery store chain does not.

In a 5-4 decision, the Supreme Court ruled in favor of freedom of speech and against the We-Can-Ban-Books Administration.

The court's defense of freedom of speech outraged certain members of the United States Senate. They offered an amendment to amend the First Amendment, which in its final form was advanced by Sen. Dick Durbin of Illinois.

This proposed constitutional amendment said in part: "Congress and the States may regulate and set reasonable limits on the raising and spending of money by candidates and others to influence elections."

This means: If you happen to be one of the "others" and Congress deems that you have raised and spent beyond what is "reasonable" in order to tell people Barack Obama seeks to curtail American liberty, the government can shut you up.

The proposed amendment also said: "Congress and the states shall have the power to ... distinguish between natural persons and corporations or other artificial entities created by law, including by prohibiting such entities from spending money to influence elections."

This means the government can prohibit a family-owned grocery store chain from speaking about an election.

The proposed amendment also said: "Nothing in this article shall be construed to grant Congress or the States the power to abridge the freedom of the press."

That means the Washington Post can still speak about elections.

On June 18, when this proposed constitutional amendment came up in the Senate Judiciary Subcommittee on the Constitution, Sen. Ted Cruz did a simple thing: He offered an amendment to replace this amendment with the exact words of the First Amendment.

The subcommittee defeated the First Amendment. Every Democrat on the panel voting against it.

On July 10, when the proposed constitutional amendment came up in the full Senate Judiciary Committee, Sen. Cruz again offered the First Amendment as a substitute. Every Democrat on the full committee voted against it.

There are politicians in America today who do not like your First Amendment rights -- and will vote against them when given the chance.