The Better Angels Under Siege

Suzanne Fields
|
Posted: Jan 20, 2017 12:01 AM
Share   Tweet
The opinions expressed by columnists are their own and do not necessarily represent the views of Townhall.com. 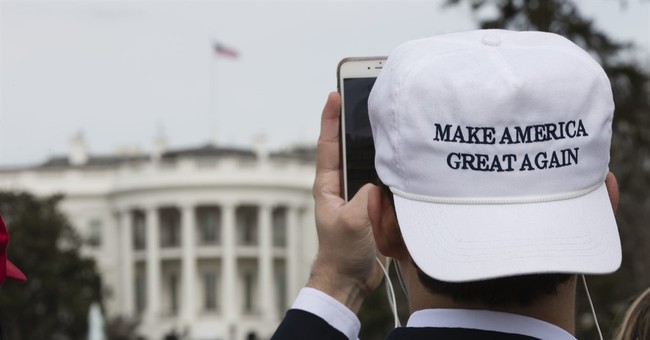 One circus closes, another comes to town. The Ringling Bros. and Barnum & Bailey Circus, "The Greatest Show on Earth," has struck the big top for good and sent its elephants to an assisted-living home for pachyderms. But the elephant lives on T-shirts, hats, caps and banners decorating the nation's capital this week.

One satirist imagines President-elect Donald Trump riding a 2,000-pound elephant down Pennsylvania Avenue to the U.S. Capitol to take the oath. He had to forswear the traditional ride from the White House with the departing president, leaving President Barack Obama to tough it out alone in the presidential limousine, recalling the frosty ride President-elect Dwight Eisenhower had with President Harry S. Truman in 1953, when the two men barely spoke to each other.

But satire is make-believe, and Obama and Trump get along. It's all those other angry men and women in the party who lost power who refuse to act like grown-ups. The Democratic donkey was born on a cartoonist's easel at the time then-presidential candidate Andrew Jackson was called a jacka--, but now the humor is mean-spirited and questions the legitimacy of a fairly elected president. It's humor without wit intended to divide, deride and denigrate. These Democrats seem to have forgotten that it's their country, too.

Anyone who witnessed earlier inaugurations knows that the atmosphere of 2017 isn't the same. As a native Washingtonian, I recall the festive air that enveloped the capital on Inauguration Day and all the festivities that followed the triumphant recognition of democracy being cheerfully at work. As schoolchildren, we watched the peaceful and celebratory transfer of power with the feeling that all was well in the land of the free and the home of the brave. Our teachers told us how fortunate we were to enjoy such an orderly change, change that children and their parents in many countries of the world could not.

Later, we watched Americans whose candidates had lost adjust to the day with stoic appreciation. Winners inevitably gloated but tried to keep vulgar smugness to a minimum. President John F. Kennedy arrived with new glamour; President Jimmy Carter with frugality and simplicity; and President Ronald Reagan with warmth and humor. We argued why the old ways were better -- or worse -- but rancor never rose to the arrogance of questioning any president's legitimacy.

Even when Richard Nixon had good reason to suspect that ballots of the dead in Chicago were contrived to defeat him in crucial Illinois in 1960, he ruled out litigation because he wouldn't put the country through divisive quarrels that questioned the legitimacy of Kennedy's victory.

But this year, Rep. John Lewis, a civil rights hero encouraged by dead-end Democrats, misuses his lofty status as icon to question the legitimacy of the 2016 election without any evidence of fraud. He played the same partisan card at the inauguration of President George W. Bush.

The anger of today's losers springs from partisan divisions that are likely deeper than Trump. Americans now not only disagree with one another but also genuinely dislike and even despise anyone who disagrees with them. They see the "other" as a bad, dangerous person of diminished moral character. Such emotions seem based less on what a person says than how the person listening interprets what he or she hears.

It's sad and even a little shocking how the slogan "Make America Great Again" is interpreted in many quarters as racist because the "again" is taken as a reference to the time in America before the civil rights revolution. A slogan is always simplistic. The sentiment of the president-elect's caught on because it recalls America after World War II, after the nation had helped save the world from the brutal fascist, racist and virulently anti-Semitic Nazi Germany, and defeated an aggressive and ruthless Japan -- and then rebuilt both.

After so many had sacrificed their limbs and many had sacrificed their lives so that others could enjoy freedom and prosperity, there was a distinct pride of place, gratitude for the good fortune of living in the United States. It was a time for righting wrongs. America turned on a dime after building the ships and airplanes that won the war, and put that spirit and energy into making cars and planes for work and play, building a future for our children.

Accompanying the pride of economic possibility was a revolutionary march toward civil rights for all. Like everything else in a complex world of humans, progress and change were not always smooth. But America never looked back, and it does not look back now. The melting pot -- much derided in the era of identity politics -- worked nevertheless, lumps in the stew and all. All men and women of goodwill will celebrate if the new president can restore all that. So now is the time for every American to wish the president well for the work of what Abraham Lincoln called "the better angels of our nature."