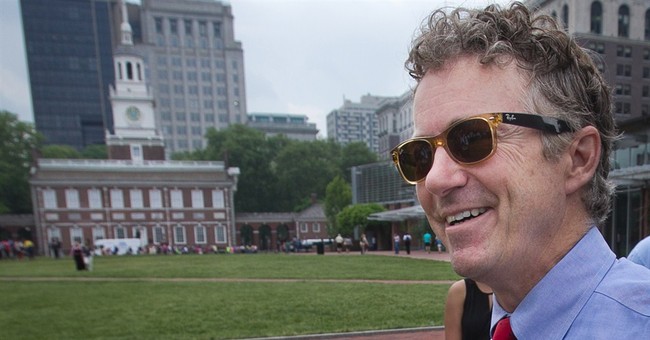 The Republicans are desperately trying to get hip. Pursuing the latest new thing is not in the Republican DNA, but it's necessary to win elections. They have to tap into the popular culture of social media to woo the younger generation of voters, and that requires a digital strategy.

Social media technology comes more or less naturally to the Democrats. Starting with Barack Obama's 2008 presidential campaign, the Democrats demonstrated a winning use of Facebook (back then the new rage), and it was far superior to the opposition's operation.

But that's so yesterday, as Marco Rubio likes to say. Republicans are stretching their digital reach now with messages dispatched in a more lighthearted way, copying the newest in (cow) bells and (dog) whistles. Will Ferrell dancing in a "more cowbell" skit on "Saturday Night Live," with his shirt creeping above his belly button, provokes laughter even when tweeted by House Speaker John Boehner with a caption needling Democrats for blowing a lot of the millennials' money.

When House Republicans dispatch video clips from "The Wolf of Wall Street" of Leonardo DiCaprio throwing money into a trash can, they're catching on, updating and exploiting an old adage -- a moving picture is worth a thousand tweets. "COOL (country-of-origin labeling) is costly for producers, retailers and consumers," says one tweet exposing the exorbitant cost of food labeling laws, extracting money from the pockets of everyone who eats.

We've moved on from the cliche that we live in a visual age. We're living now in the Age of the Image, where what you see has to tell you something at warp speed. If you don't get it before the pixels that make up the image move on to the next message, you've missed it.

When Barack Obama used Facebook to announce that he wants the government to pay two years' tuition for everyone attending classes at a community college, the Republicans understood it was about drawing millennials into the Democratic Party. The speaker's office quickly responded with images of pop singer Taylor Swift and a message that millennials would understand: "Not even all the Taylor Swift album sales in the world would cover that bill."

The millennials were told in language they could understand that they would be paying for all that "free" community-college education -- in more taxes if not more tuition.

Those moving images with messages are known in the high-tech trade as GIFs, an acronym for "graphics interchange format," which are expected to both educate and entertain in a compressed form. Promoters use GIFS to sell products as well as politicians, ideas along with ideology, to an impatient audience with miniscule attention spans. Information sweetened with animation is aimed at all those kids who grew up with dancing numbers on Sesame Street. That's a huge cohort that makes every politician drool.

Dan Pfeiffer, who was among the technology wonks who devised President Obama's digital strategies, tells The Wall Street Journal that the Republicans mean well but are still behind the curve. "They are using new platforms, but they are using them to broadcast a message, not to engage the public." Republicans are awkward spectators in the Age of the Image.

But Caleb Smith, digital communications director for Speaker Boehner, sees it differently. The use of GIFs engages viewers in a fresh way, he says, and 95 percent of those who watched their Taylor Swift messages were newcomers to the website. The big task is to keep them coming.

A cyber handshake doesn't have the thrill of pressing actual flesh, but interaction online is the latest version of "intimacy" in politics. A live video stream of the campaigner taking questions on screen gives a certain sense of faked closeness between him and the audience. It's the 21st century equivalent of the 20th century leap from radio to television.

More than Facebook, emails, live streams and GIFs will be required for Republicans to win the millennials; polls show them favoring Democrats by wide margins. But that can change. Of the 31 members of Congress under 40, 20 are Republicans. The House Republican Policy Committee convened a hearing by its Millennial Task Force not long ago, led by Rep. Elise Stefanik of New York, now 31, the youngest woman elected to Congress. A young pollster on a panel observed that if Democrats choose Hillary Clinton as their nominee, at 69, she will epitomize what's old, white and rich: "Republicans are what's new; Democrats are what's old." Imagine that as a sweet tweet becoming the GIF that keeps on giving.