A Death in the Family of Joe Biden 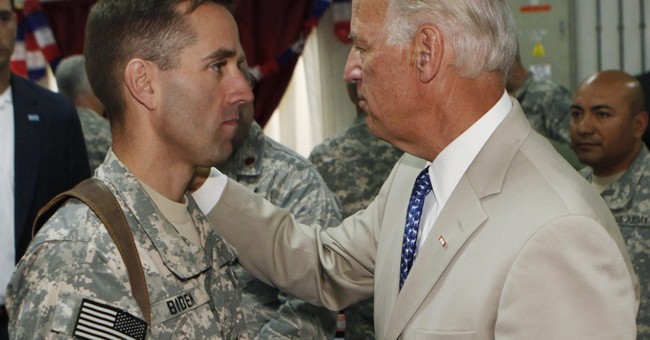 Trending
Public grief is suspect in Washington. It comes too easily to those who use it to manipulate attitudes and make political points. Lobbyists, advocates and opinion makers are quick to exploit grief to push some kind of policy to spend government money, ban guns, control climate and regulate lives. Death quickly morphs into a political cause.

In a secular society, we lack unifying forms to express sympathy and consolation for a public person. Sermons, flowers, letters and cards help those in mourning to grieve, but most of us feel inadequate in reaching out to the person who suffers a loss, especially when that person is a public figure. The give and take of political leadership often dehumanizes the man we see daily on stage and in the newspapers and on television screens. The personality and character of leaders are often reduced to interpretation, fragmented motion like a Picasso painting showing abstracted angles of the human face, or eclipsed by disjointed clips with disconnected phrases spouting familiar slogans.

That's a problem when we suddenly learn that one of those leaders confronts great personal loss, a there-but-for-the-grace-of-God-go-I grief. We have to rearrange perceptions to see the whole person, the public servant who carries burdens other than those of state. Observations made in the heat of argument, criticism aimed at an attitude, humor at a gaffe evaporate as we see the whole person of flesh, blood and tears who must carry on despite family tragedy.

When we heard that Vice President Joe Biden had lost his beloved son, Beau, age 46, father of two, former attorney general of Delaware, expected to run for governor, we were struck numb by the enormity of suffering for the loss of a son in the prime of his life. Before us was a father facing a tragedy no man should have to face, the death of a child.

Joe Biden was well acquainted with unspeakable tragedy. His wife and infant daughter were killed in an automobile accident just before he was to be sworn in as a first term U.S. senator from Delaware in 1973. We were reminded that he took his oath of office at the hospital bedside of Beau and his brother, who were recovering from injuries after the accident that took their mother and sister.

Now Joe grieves a child again. When he was invited to give the commencement address at Yale not long ago, he was asked to tell his personal story of resiliency and compassion. He did that, without mentioning that Beau lay dying of a tumor in his brain.

The speech is inspiring in its particulars and astonishing for its Irish humor, humor that haunted the father's knowledge of what he knew lay just ahead. How could he survive another death in the family? But he spoke to the graduates as a Christian armed with the consolations of faith.

"With regard to resilience and compassion," he said, "there are countless thousands of people, maybe some in the audience, who've suffered through personal losses similar to mine or much worse, with less support to help them get through it and much less reason to want to go through it." He echoed the words of the poet Edward Hirsch, that mourning the death of his son felt to him like "carrying a bag of cement up a mountain top at night," but who urges everyone to look closely because there are others carrying bags of cement, too.

The core of the good life is about family and "being personal," even in politics. Differences distort politics, he said, and the graduates could question another man's judgment, but never his motives. He told how he had once disagreed with Jesse Helms, a conservative senator from North Carolina, for his approach to disabilities legislation. He had caricatured what seemed to him Mr. Helms' disregard for the disabled. He then learned that the senator and his wife had adopted a young man with braces on both legs. It was a lesson learned. Though the two senators continued to hold profound political differences, they worked together with respect for differences, not motive. The cheap shots ended.

It's not difficult to be compassionate in your lowest moments, he told them, when you have benefited from the compassion of others, "not only from your family, but from your friends and total strangers." From deep in a sympathetic heart, this column is for you, Joe.