Does a Young Rubio Frighten an Older Hillary? 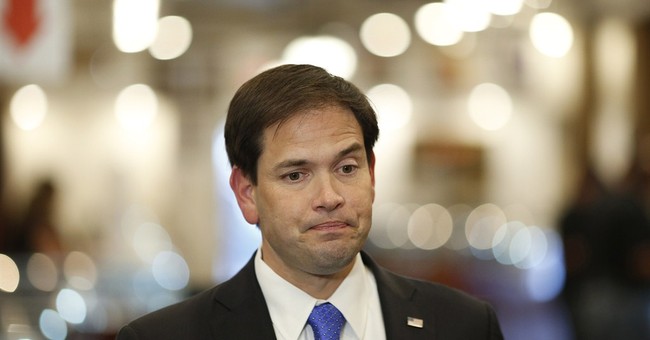 Many of the Republican wannabes have been on center stage in their home states for years, but none as long in the public eye as Hillary. She has moved from first lady in Arkansas to first lady in Washington to senator from New York to international flyer as secretary of state. But as Carly Fiorina described her last occupation, "flying is not an accomplishment; it's an activity."

Whether speaking ever so briefly to the press or simply remaining in distant silence, her approach to date is one of, "I won't rock the boat." The stories of how she raked in extremely large bucks for speeches goes unremarked by her, beyond acknowledging her good fortune of being able to earn money after she left the White House "dead broke," and public trust has sharply eroded. Since she's unchallenged by any major competitor in her party, Hillary is likely to glide to the nomination. Which raises another question: If she's elected, will she charge the full standard $500,000 for her inaugural address or will the nation get a discount"

Politics is full of surprises (which makes it such fun), and the election is a long way away. Eight years ago, Hillary watched inevitability evaporate in a cluster of errors and "likeability." She's on the board at the odds of a horse poised to win the Belmont Stakes, a long race even for a champion, where the test of ability must be matched with stamina and endurance. In horses and candidates, that's a tough call.

Neither does she know, as the Democratic nominee, who she would be matched against. The buzz at the moment is that Marco Rubio scares Hillary and the Democrats most. As the son of Cuban immigrants with a moving personal story to tell, he's a threat to the Democratic dominance of the Hispanic vote. A corollary is the concern that haunted her 2008 campaign: A new generation of voters aches to have a representative voice, and many young voters might see her as an old lady.

In 2008, large numbers of young black women who had been ready for Hillary switched to Obama when they thought he would win. Race trumped feminism. Obama's youth and race were a win-win for them. Could race trump party loyalty?

The Hispanic vote is more opaque, and the immigration issue for Mr. Rubio is mixed; he backed away from an immigration reform bill he once supported, acknowledging the verity that first, Americans must be persuaded that "illegal immigration is under control." Some call this a "flip-flop"; others call it realistic. He insists he understands the full dimensions of a difficult problem.

Patti Solis Doyle, who ran most of Hillary's campaign in 2008, suggests he may be right. Miss Doyle, who is Hispanic, tells The Washington Post that Sen. Rubio "could have the ability to nip away at the numbers for the Democrats." She thinks a candidate of Cuban ancestry could persuade a "reasonable percentage" of Hispanics to vote Republican.

When Sen. Rubio launched his campaign, he doubled down on the story of his parents, who fled Fidel Castro's Cuba, with a strong appeal to how young immigrants can make their American dream come true. Rather than feel intimidated by announcing his candidacy a day after Hillary announced hers, he seized it as an opportunity to make a dramatic generational contrast.

"This election is a generational choice about what kind of country we will be," Mr. Rubio, 44, said. "Just yesterday, a leader from yesterday began a campaign for president by promising to take us back to yesterday. But yesterday is over, and we're never going back." He emphasized his belief that the nation must make the 21st another American century, unleashing the power and pride of the entrepreneur, the ambitious visionaries of business, technology and science, moving away from the stale formula of taxing, borrowing and regulating like it's 1999 all over again.

As the youngest candidate in the field, he highlights the age problem Hillary confronts. At 67, she's old enough to be his mother and the grandmother of his children. Ronald Reagan dealt with his "age problem" with his gift of wit, cracking up Walter Mondale and the rest of us with a promise: "I will not make age an issue; I am not going to exploit for political purposes my opponent's age and inexperience." No one can imagine Hillary, who has neither the gift of wit nor self-deprecating charm, coming up with something like that. But the question will nevertheless hover over the 2016 campaign.