Warming the Season With Heated Debate 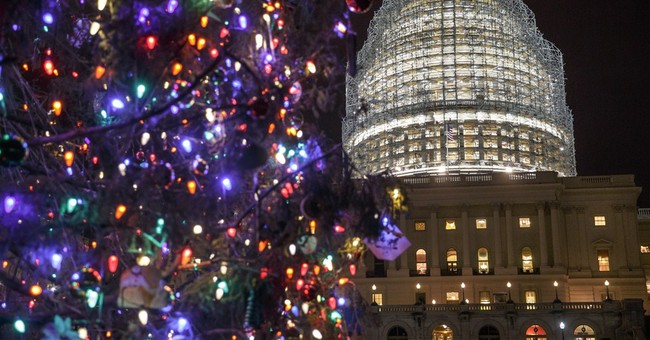 Trending
Tis the season when we're supposed to be jolly, our lives brightened by lights on the Christmas tree, candles on the menorah, gift giving and gift receiving, warming us however frightful the weather outside.

Nearly everyone can find something to like in the season. But there's lots that must be liked with trepidation. We join with family and friends to celebrate and ventilate, sometimes amicably, sometimes not. We're quick to argue, often merely about different perceptions. Disputes break out not only about what we see, but how we see it, whether in print or on screen, big or small, on cable or network.

Arguments give the mildest-mannered among us indigestion, and it's not the fruitcake or latkes. Like Proust, who dipped a madeleine in his tea and opened the floodgate on memory, most of us can remember other holidays that erupted with heated discussions, lots of raised voices and shouts barely short of insult over political candidates, foreign wars, movies, television and books. We recall the white-hot words even when we can't remember what they were about. There's a lesson there for the present moment.

Teenagers with nose rings or tattoos don't have to say anything to provoke ire (which is sometimes the point of the nose rings and tattoos). Eccentric uncles, sentimental aunts, arrogant older brothers and haughty sisters embarrass the youngest among us with the pretentious questions and self-righteous certainties. Thus has it always been. One of my aunts furiously berated the long hair and feminine fashion of 1960s hippies, only to turn red in the face when someone pointed out the shoulder-length coif and a feminine puffed sleeve on a man in a cherished 17th-century portrait above her mantelpiece.

Nothing will be more contentious this year than different opinions over what the CIA did (and overdid) to keep the country safe after 9/11, newly fueled by the partisan Senate Intelligence Report on enhanced interrogation techniques (or torture, if you like). Different opinions on what happened in Ferguson and Staten Island will ignite angry words. Immigration and the president's executive orders have sharpened the points on the slings and arrows.

The best thing a democracy offers is the teaching of tolerance for other viewpoints, which is easier said than done. Patriarchs and matriarchs will try to hush the most heated conversations, but if these discussions could focus on issues rather than the ad hominem, we might all learn something. We might even begin to appreciate a point of view we've ignored, or begin to reconsider something we once held as an indisputable truth.

In a provocative article on "The Argumentative Jew" in The Jewish Review of Books, Leon Wieseltier makes a case for that stereotypical figure of ancient heritage, who is always arguing over something -- an idea, a political belief or a point of theological doctrine, an ethical principle or the concept of reason itself.

"In the Jewish tradition, disagreement is not only real, it is also ideal," he writes, "at least in the unredeemed world, which is the only world we know. In the millennia of disputations, even mistaken opinions are not without legitimacy. Minority opinions are not obsolete opinions: They are preserved alongside majority opinions because their reasoning may one day be useful again."

As long as argument rages, we accept different perspectives and become more thoughtful. In our constitutional government, appeals about the law go all the way to the Supreme Court, righting wrongs, inspiring the rethinking of cherished positions. As we sip an eggnog or quaff a grog, we might remember that alcohol was once prohibited, to loud applause, and later repealed to louder applause.

High school debate teams offer young people one of the most rigorous ways to test their reasoning when they learn to defend both sides of a question, even if they have a firm belief in only one side. They learn how to see the flaws in their own arguments.

John Milton, the English Puritan essayist and poet, wrote his classic "Areopagitica" against government censorship, emphasizing the importance of understanding the other side of an argument before it can be dismissed. It was so important to him, he gives Satan powerful points of argument against God in "Paradise Lost." Readers decide for themselves who wins. (The smart money goes on God.)

Quarrels over ideas are rooted in a pluralistic society. One of the most curious friendships in Washington is one between two Supreme Court justices, Ruth Bader Ginsberg and Anthony Scalia, who best represent the ideological polarities on the court. Yet they are known to enjoy each other's company over dinner and at the opera, mixing intellect and a sense of humor in conversation. It's an example for us all. Happy Holidays.