The Taboos Crumble, and Free Speech Is Threatened 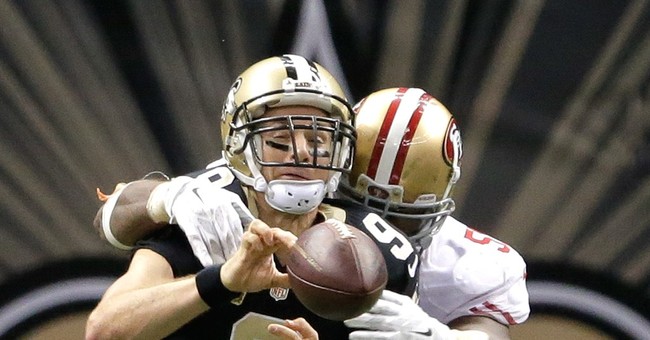 Trending
The more vulgar the culture gets, the more squeamish the keepers of the rules. The more verbal and visual taboos we break, the greater the threat to free speech.

The National Football League institutes a 15-yard penalty for a football player who uses the N-word. If he uses it a second time, he's benched. This is the word with a cruel racist history, but which is now used as a term of affection if the person of the right color uses it. It's a word heard 500,000 times a day, reports The Washington Post in a front-page story that examines the way the N-word has spread through the popular culture, punctuating rap music, video games and conversational exchanges in stage, screen (of various sizes) and radio. That doesn't include the way the epithet echoes through the hallways of almost any high school.

Although super rapper Kanye West gives permission to his audiences to sing the N-word along with him, as if "permission" were his to give, the permission among more fastidious politically correct elites is not taken. At an alumnae panel discussion at Smith College, where education was presumed to be rooted in academic freedom, Wendy Kaminer, social critic, writer and alumna, said the N-word out loud to make a point about the dangers of censoring Mark Twain's classic, "The Adventures of Huckleberry Finn." Her point, obvious to readers looking for literary insights rather than an occasion to take offense, is that the novel reflects the authenticity of experience of the time and place it describes. The critic and her credentials and good sense were nevertheless excoriated as "racist" in the campus newspapers of Smith and neighboring Mount Holyoke College.

Kathleen McCartney, president of Smith, apologized to those who were "hurt" or felt "unsafe" or somehow threatened by Ms. Kaminer's vocabulary, though the title of the panel was called "Challenging the Ideological Echo Chamber: Free Speech, Civil Discourse and the Liberal Arts." Some challenge.

One professor of English literature published Mark Twain's novel never referring to the character Nigger Jim, but calling him Slave Jim. That's easy to do on a computer by hitting the command key "replace," but Mark Twain deserves better, and so do our young students.

Harvey Silvergate, co-founder of the Foundation for Individual Rights in Education, who tracks assaults on the First Amendment and free speech, is alarmed by the increasing number of fainting couches and bottles of smelling salts needed to relieve fainthearted and easily offended college students. "What should be the object of derision, a focus for satire, is instead the subject of serious faux-academic discussion and precautionary warnings," he writes in The Wall Street Journal.

He refers not only to movements to sanitize language but to recent attempts by a number of universities to protect timid sensibilities from trauma and travail with warnings about entire books, where the depiction of violence may offend. Post-traumatic stress disorder, once seen only on a battlefield, has spread to shell-shocked readers who take hits in the psyche on reading how Ahab stabs Moby Dick or Medea kills her kids. Such is the peril to the "intellectually challenged."

The popular culture was once a playground for rebellion, where it was easy to shock with a new dance style, dress or sexual allusion, separating the rising generation from the older one. The mommies and the daddies (as opposed to the folk rockers Mamas and the Papas) were gatekeepers, giving a patina of protection to benign rebellion. This allowed the young to celebrate their passage toward a new identity with creative thinking. Elvis Presley was not photographed from the waist down when he appeared on the Ed Sullivan Show in 1956, and his swiveling hips became icons of rock and roll.

Acceptance of vulgarity into the mainstream was once slower, more selective and more judicious. Modern media vulgarity is embraced, imitated and assimilated so quickly that rebellion packs little punch, and witty shock swiftly morphs into dull vulgarity. The early Madonna demonstrated salacious humor in pushing the envelope; the later Madonna became monotonous in her over-the-top extravaganzas of her lady parts.

In our Internet Age, rebellion is ubiquitous and easily usurped, synthesized, monetized, mashed and manipulated, with shallow and diminishing power, flattening emotional responses. Hence, the N-word is everywhere and nowhere: the linebacker or tackle is penalized for using it; Kanye West is applauded for using it; Mark Twain is deprived of aesthetic authenticity; and history is cheated of understanding.

Pogo, the eminent funny-paper philosopher got it just right. "We have met the enemy, and he is us."