When War Is Not Metaphor 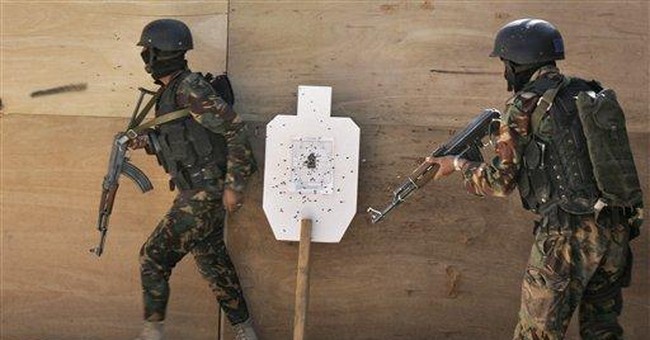 My dinner partner at the holiday table was home on leave from Army Ranger training. He had been living outdoors, learning to be at home in the rain and the mud, eating to lose weight and build muscle through rigorous sleep-deprived maneuvers. He could run, jump and do push-ups in numbers that would embarrass the regulars at the local gym who pump iron and swim their laps in the comfort of indoor luxury.

He had been an ROTC cadet at one of our elite Eastern universities. He was sure that none from his class could be happier than he was. He wanted to be an Army Ranger because it would give his life meaning and purpose. He wasn't sure many of his classmates in other professions would say that. He wanted a part of ensuring the future of his country.

With neither sentiment nor arrogance, he talked of taking seriously the defense of country. He regards al-Qaida-trained terrorists as a deep and lethal threat to everything he holds dear. He was very matter of fact, and it was I who waxed sentimental, imagining him listening to Kate Smith sing "God Bless America." She was the lyrical voice of patriotism during World War II and made Irving Berlin's song a new battle hymn of the republic.

We don't have a Kate Smith today. Our showbiz celebrities act as if they don't know there's a war on. They're more concerned with acting outrageous than honoring the courageous. They no longer bother to give lip service to the values of God and country, and yet we face enemies as deadly and as determined as any we fought 70 years ago. The enemy today hides in caves, covens and cells but is just as real as the Nazis who set out to rule the world. They wear neither uniform nor identifiable insignia, and sometimes designer suits as camouflage. But their goal is as evil as the goals of Nazi Germany or Imperial Japan.

President Obama observed the obvious in accepting the Nobel Peace Prize, but it was a needed reminder: "Evil does exist in the world. A nonviolent movement could not have halted Hitler's armies. Negotiations cannot convince al-Qaida's leader to lay down their arms." He reminded his Norwegian hosts that many of their countrymen feel "deep ambivalence about military action today."

What he didn't talk about was the deep ambivalence many Americans as well feel toward military action. It's those ambivalent Americans the president yielded to in granting the Christmas Day bomber a civil rather than a military trial. Why the man with explosives in his underwear should be dealt with differently than, say, the eight Nazi saboteurs who arrived on the Atlantic shore in 1942 with explosives in a suitcase is a puzzle. They got their day in a military court, and though they never managed to detonate a single bomb, six were executed in the electric chair, one was sentenced to life in prison and the other was sentenced to 30 years.

Some of our most squeamish citizens cannot grasp the reality that the war on terror is not metaphor, that neither a saboteur nor a terrorist is entitled to the rights of a common criminal. Their arguments are weak and predictable.

"We have nothing to be ashamed of, little to fear and much to be proud of treating captured foreign terrorists as we would treat any upstanding American who tried to blow up an airplane full of people," writes Michael Kinsley in The New York Times.

Such reasoning is easy for those who intend no sacrifice, and patently absurd. There's a huge difference, obvious to most of us, between a domestic shooter serving his own ends and a terrorist recruited in the Third World, radicalized in London and trained in Yemen to blow up innocents and spread fear. Our law recognizes such difference, and only a fancy double-talker would try to equate them.

The desire for this Yemen-trained terrorist to stand trial complicates the closing of Guantanamo. Almost half of the 200 remaining prisoners in Guantanamo are from Yemen, and as Thomas Wolfe might put it, they can't go home again. No other country wants them.

We know now that Yemen recycles terrorists, and those who trained Umar Farouk Abdulmutallab in his underwear-bomb tactics will cheer him on in the spotlight of a civilian trial. Ranger, beware.