Cheating the Least Among Us 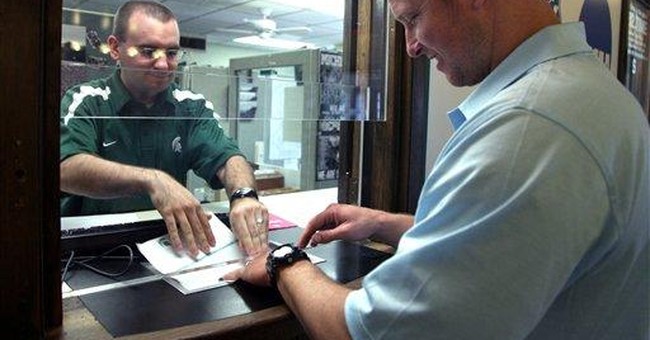 Colonial Williamsburg is proud of its tradesmen. You can see the carpenters walking out of the history books and down the cobblestone streets, ready to talk to visitors about how they hammered Williamsburg together, log by log, shingle by shingle, as if still in the 18th century.

These tradesmen built new homes, smokehouses, dairies, barns. They built additions and repaired old structures. Some were skilled carpenters and bricklayers, others were just learning, but together they raised rafters and roof beams, set door frames, laid floors with timber cut from nearby trees.

The colonial wages were paid to the original Williamsburg tradesmen in Spanish-milled dollars and doubloons (worth about $16). Money was minted in Mexico and called "pillar dollars" because of its image of two pillars flanking two globes reflecting the colonial version of a global economy.

But all that was a long time ago. Today, the picture for laborers who aren't in 18th century costume tells a different story. Many arrive from Mexico without money of any kind. Immigrants from Mexico, Central and South America are often the last hired and the most abused and exploited. Their daily pay is the equivalent to what a "pillar dollar" would be worth today.

In a boom economy, the rich -- like Bernie Madoff -- exploit the rich. Hurt hardest in the current recession are the illegal immigrants, mostly from Mexico, who are sometimes paid with checks that bounce. Their employers figure they won't complain because they're illegal and are afraid of being sent home. With many Americans and workers with green cards joining the ranks of the unemployed, such victims don't garner a lot of sympathy, but the Norfolk Virginian-Pilot uncovered a nest of nasty contractors taking cruel advantage during the recession of those at the bottom of the economic ladder -- penny-ante Bernie Madoffs trading in human labor.

No matter what you think about illegal immigration, a scam is a scam. It lowers the morale of workers and the state of workmanship. "At the end of the day, any human being who works is entitled to pay, regardless whether they're documented or not," says Myra Creed, chairwoman of the Hispanic Advisory Committee in Newport News, Va.

Who can argue with that? In Washington and the suburbs, day workers line up for work on street corners, waiting for contractors to collect them for delivery to a day's work. It's a legitimate custom, and the employers are easy to identify. But in these parts of Virginia, hungry immigrants hear about jobs through informal networks spread by word of mouth. The vulnerable become even more vulnerable. Workers who threaten to report employers for cheating them say they're threatened with exposure, reported as illegal as though their status were unknown to the employers who hired them.

Typical is Edgar Cardenos, an illegal immigrant from Nicaragua who has been in this country for eight years. His wife is pregnant with their second daughter, who will, of course, be an American citizen by virtue of birth. He heard about an Outback Steakhouse in the neighborhood that was paying $15 to build an addition to the building. He hurried to the parking lot of the restaurant, saw a crew of men putting up dry wall, spackling seams, creating a new ceiling and installing exterior siding. He was told he could join them at $15 an hour. He put in two weeks' work and received a check for one week. The contractor promised the rest later. The first check bounced, the next one never arrived. The initial contractor said he hired a subcontractor and paid off at his end. He was two steps away from the crime. The subcontractor disappeared. Such employers are twice guilty -- first for hiring illegals and then for cheating them of their pay.

This isn't a high-bucks Ponzi scheme, but low life cheating of human labor. Wendy Inge, director of the Virginia Department of Labor and Industry, told the Virginian-Pilot that when a worker complains, no one investigates his immigration status. Nevertheless, cheated laborers are afraid to complain lest they be sent home.

Cardenos has now applied for an income tax ID, though zero times zero, as any child learning his multiplication tables can tell you, is still zero. Cardenos does the kind of low-wage work that even in these tough times others don't want to do. He now works at two painting jobs, putting in 16 hours a day.

"It's very difficult to (work) where you don't get paid," says Cardenos. "I have a family to take care of."

Life is not fair -- we all know that. Bernie Madoff is living the prison life, leaving his wife to survive on $6 million. But the recession is "unfairer" to some than to others.