The Irrational Exuberance of November 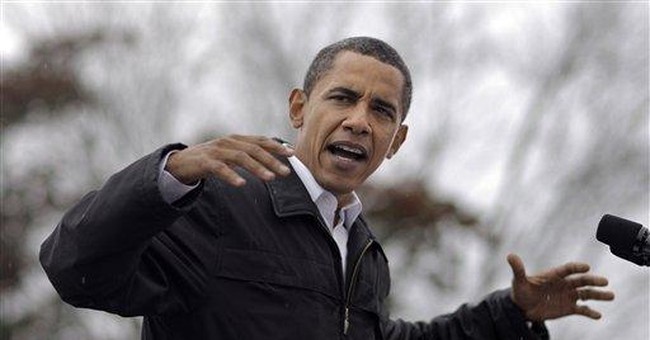 "Throw the bums out!" That's one of the most familiar campaign cries in our history. It's even more effective than Herbert Hoover's slogan of "a chicken in every pot and a car in every garage" and stirs the blood like "Tippecanoe and Tyler, too" never could. Sometimes a little bum-throwing makes sense. Sometimes it doesn't.

In just over three weeks we'll elect a president who, whether it turns out that he's John McCain or Barack Obama, has crossed his heart and hoped to die if he doesn't make good on his promise to throw out the policies of an embattled president, if not that president himself. "President Obama," if there is one, might even chase George and Laura down Pennsylvania Ave., throwing sticks, stones and harsh words at the moving van.

A lot of the rhetoric of any campaign is designed to encourage foolishness, like expecting voters to believe everything they hear from the platform. Voters often relish being unpredictable and make unlikely choices. The political scientists and other academics who demand a rational explanation of things for which there may be no rational explanation often rail at "public ignorance" as the cause of not seeing things as they think the public should. These wise men think all that's important is "policy" and a candidate's ability to define undefined presidential "doctrine," or to play a version of Trivial Pursuit, such as identifying the middle initial of an assistant associate undersecretary of state.

Larry Bartels, a professor of politics at Princeton, suggests in a fascinating article in the Wilson Quarterly that the proper response to such thinking is a mocking, "So what?" Voters usually get to the place they want to go, and they choose how they get there.

"The political consequences of 'public ignorance' must be demonstrated, not assumed," argues Prof. Bartels. "And that requires focusing not just on what voters don't know, but on how what they don't know actually affects how they vote. Do they manage to make sensible choices despite being hazy about the details of politics and government? If they do, that's not stupid -- it's efficient." These political scientists might make the common academic assumption that voters are always rational, "but a half-century of [scientific analysis] provides plenty of grounds for pessimism about voters' rationality."

Nothing annoys academics like the notion that faith in native common sense trumps arcane argument, that voters will take a lot on faith if they decide a candidate is likeable, down to earth and serious enough to be trusted. Sometimes voters make choices that seem to be textbook cases of irrationality, never more so, for example, than election results in Arkansas in 1968. Voters there on a single day gave resounding victories to George C. Wallace, a third-party segregationist candidate for president; William Fulbright, a moderately conservative Democratic incumbent U.S. senator; and Winthrop Rockefeller, a moderately liberal Republican running for governor. They still talk about that one in political-science seminars.

Sometimes voters just want to express unfocused anger, and take it out on whoever is unlucky enough to be at hand. Like this year. George W. Bush is not available as a target, so for some voters John McCain will have to do.

There's a bizarre precedent of sorts. In the summer of 1916, killer sharks repeatedly attacked swimmers along the New Jersey shore, killing four of them over a period of weeks. The attacks were brazen, even for hungry sharks. One shark even ventured up a freshwater stream to find a victim. The attacks were unprecedented, and the tourist season was ruined. Several hotels were all but forced into bankruptcy when vacationers abandoned the shore by the thousands and didn't return.

Jersey residents demanded that Congress pass a law, or something, though killer sharks are notorious for not obeying the law. So Jersey voters took it out on a popular president, who had been the state's favorite son from his term as governor and, before that, the president of Princeton. Woodrow Wilson was re-elected president that November anyway, though not with much help from voters in the towns along the Jersey shore.

History is an unreliable guide for Messrs. McCain and Obama because nobody can ever be sure where whimsy -- sometimes defined as "irrationality" in college lecture halls -- will be aimed. Just as in earlier election years, millions of voters will act on hunches and guesses next month, on feelings held deep in the pit of the stomach. Therein lies the secret to the great political success we call democracy.