A Rising Tide of Ignorance 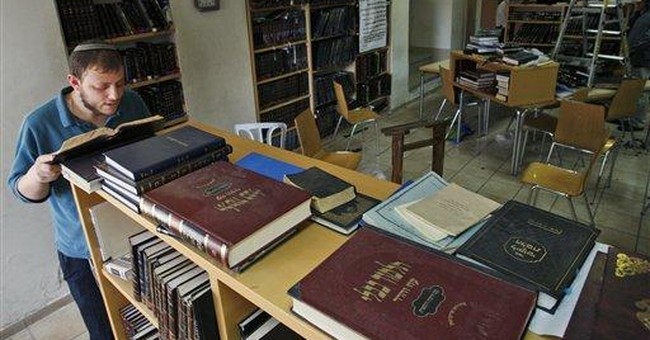 Americans have always loved to read. The first pilgrims brought their Bibles with them, and the Good Book was well-thumbed. The Founding Fathers were avid readers of philosophy and history, and their arguments for freedom were informed and sharpened by knowledge in the books by British and European thinkers.

The Declaration of Independence was grounded in the poetic cadences drawn from Thomas Jefferson's knowledge of the language, which grew from his extensive library. The first books of the Library of Congress, which became the largest library in the world, were the books he collected at Monticello.

We draw strength from words. Throughout our history, Americans have read deeply and copiously recorded ideas gleaned from pamphlets, newspapers, diaries and books. "We are the Arguing Country, born in, and born to, debate," Howard Fineman points out in his new book, "The Thirteen American Arguments." He reminds us that Thomas Paine's "Common Sense" was a bestseller in 1776; in a population of 3 million, it sold 600,000 copies.

We've always thought of reading as power. Slaveholders wouldn't allow slaves to learn to read because they knew reading would give them "dangerous" ideas. Learning the alphabet, said Frederick Douglass, was the first "inch" out of his mental darkness as a slave. Whenever he was sent on errands, he carried a book and traded pieces of bread with hungry white boys along the way in exchange for reading lessons. They gave him that "more valuable bread of knowledge," he said. Abraham Lincoln read nightly by the dim light of an oil lamp, where he discovered words that would enrich the eloquence of his oratory.

But reading is in trouble today. Americans, particularly young Americans, limit themselves to information -- "data," in the cliche -- collected on a computer screen and in tiny letters on a cell phone. This holds serious risks. Digital information replaces knowledge, opinion is confused with fact, and wisdom is lost in a whirlwind of words, words, words -- many misused, others without substance.

Veritas goes unverified when the source is Wikipedia, the encyclopedia on the Internet that employs no fact-checkers. Keeping their students from plagiarizing from the Internet, complain university professors, is like trying to prevent a stampede with a wooden fence.

Students ace courses without ever going to primary sources. Weak reading habits start early. International studies show that reading scores of American 13-year-olds rank far behind the scores of teenagers in Poland, Korea, France and Canada, among other nations. In one study of what 17-year-olds know of history and literature, the surveyors found mostly ignorance.

Frederick M. Hess, an education scholar who conducted the interviews, found that fewer than half could identify Job in the Old Testament or Oedipus in the plays by Sophocles. Many had never heard of the novel "1984" or knew the meaning of "Orwellian." Few could tell the interviewers when the Civil War was fought.

"Pundits, novelists and journalists routinely wield references to Job and Oedipus when writing about the trials of a public figure or the complexities of familial relationships," says Frederick Hess. "High school graduates unacquainted with these terms are handicapped when it comes to engaging in such public debates."

He conducted the survey for Common Core, a new Washington-based research and advocacy group that promotes expanded study in the liberal arts and sciences. In my own personal survey of stories from various newspapers in the last week, I found numerous literary references to T.S. Eliot ("The Wasteland" and "The Hollow Men"), William Shakespeare ("Macbeth" and "Hamlet"), Herman Melville ("Billy Budd" and "Moby Dick") and William Faulkner ("The Sound and the Fury").

No Child Left Behind legislation was well intentioned, but its emphasis on testing has had unintended consequences. Not only do many teachers teach to the test (painting by the numbers), but literature and history have been moved to the margins, preserving ignorance and shorting subjects that emphasize creative and critical thinking.

Some reforms have worked better than others, creating a knowledge gap between the "haves" and the "have-nots." In the Common Core survey, for example, children with at least one college-educated parent far outstripped those whose parents did not go beyond high school.

One of the best innovative programs in education today is the Knowledge is Power Program (KIPP), which has developed a national network of free open-enrollment college-preparatory public schools in communities with poor educational resources.

While fewer than one in five low-income students typically attend college nationally, KIPP's college matriculation rate stands at nearly 80 percent for students who complete the eighth grade. But the network is small. Knowledge is power, but inertia is tempting. The ignorance of our intellectually abused young proves it.