Susan Stamper Brown
|
Posted: Jan 01, 2018 12:01 AM
Share   Tweet
The opinions expressed by columnists are their own and do not necessarily represent the views of Townhall.com. 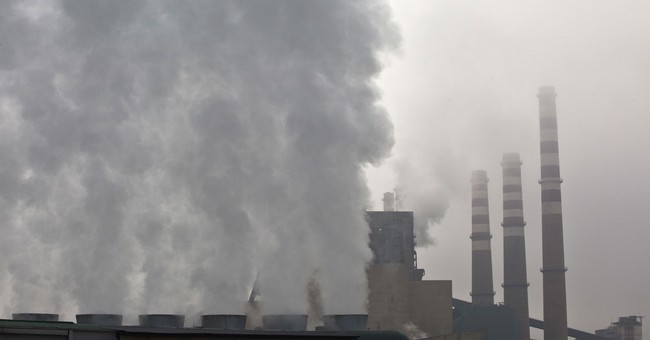 On Twitter December 28, President Trump wrote: “In the East, it could be the COLDEST New Year’s Eve on record. Perhaps we could use a little bit of that good old Global Warming that our Country, but not other countries, was going to pay TRILLIONS OF DOLLARS to protect against. Bundle up!”

Predictably, social media lit up with comments by agitated alarmists who apparently believe everything, including the gas problem their great uncle had during Christmas dinner, is caused by global warming. They won’t be happy until the Earth freezes over and everyone dies.

They must have missed the news that Escambia County Florida had nearly two inches of snow on December 10, Erie, Pennsylvania just broke a 59-year-old snowfall record and  International Falls, Minnesota had a record-breaking 37 degrees below zero Christmas week. This happened thanks to a phenomenon scientists call a “Rossby wave” -- not global warming -- whereby Alaska blows it’s arctic air south while simultaneously “inhaling” warm air from the tropics. We get a break from the cold while folks in the Lower 48 get to experience what living in Alaska is like without buying a plane ticket.

Besides record-breaking cold, alarmists ignore that snowfall has increased for more than a century.

Up here in my little slice of paradise, researchers were recently shocked that the snowfall has doubled on Mt. Hunter in the Alaska range since the mid-1800s. In that same time frame, southcentral Alaska has experienced a 117 percent increase in winter snowfall and a 49 percent increase in summer snowfall. In addition, from 1950 to 2011, many coastal Alaskan towns have experienced winter snow increases ranging from 26 percent in Yakutat to 67 percent in Kodiak.

On December 6, 2017, in the Chugach mountains I call home, Thompson Pass, experienced one of history’s most intense snowfalls at a rate of 10 inches per hour. That’s a record even for Thompson Pass which often gets between 600 to 900 inches of snow per year.

The Anchorage Daily News reports that Alaska’s “cool late-summer weather over the central Arctic Ocean helped preserve sea ice, slowing its melting enough to rank this year’s annual ice minimum as only the eighth lowest in the satellite record, far from the worst it’s been.”

Record cold. Record snow. Recovering sea ice. But, things are not always as they appear. The U.S. House of Representatives Committee on Science, Space and Technology announced in February 2017 they are investigating the National Oceanic and Atmospheric Administration (NOAA) for alleged climate data manipulation after whistleblowers stepped forward, including Dr. John Bates, former principal scientist at the National Climatic Data Center in Asheville North Carolina who claims NOAA scientists put a “thumb on the scale” to favor their global warming argument.

Maybe this is not about science at all. Maybe it’s more about phony prophets painting fake pictures to produce an alternate reality.

Alarmists are not interested in the indisputable evidence the Earth goes through cyclical periods of cooling and warming. The Earth experienced periods of glaciation, then melting, long before the construction of Al Gore’s energy-devouring Nashville home and Leonardo DiCaprio’s excessive use of private jets.

Gore said the Arctic would be ice free by 2014 and the guy that Democrats call a “prophet,” James Hansen, former director of NASA’s Godard Institute for Space Studies, predicted the Arctic ice would melt by the end of 2017.

Hansen recently published a paper suggesting we are now on the brink of a short ice age caused by…wait for it…global warming. He claims global temperatures are an “unreliable diagnostic of planetary condition as the ice melt increases” and predicts “large scale regional cooling by mid-century” for the North Atlantic and Southern oceans.

Obviously, climate alarmists have the same answer for every weather pattern, so the rest of us normal folks should forget them and focus on reality. Right about now, a little global warming sounds nice as we dream of white sandy beaches, not the white powdery stuff outside our windows waiting to be shoveled.