Despite Terrorism, Peace On Earth Is Not Dead

Susan Stamper Brown
|
Posted: Jul 06, 2016 12:01 AM
Share   Tweet
The opinions expressed by columnists are their own and do not necessarily represent the views of Townhall.com. 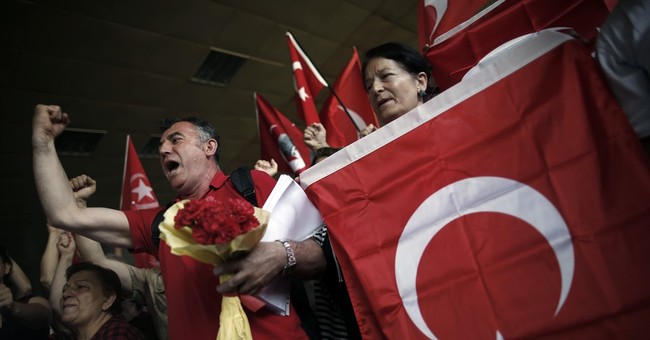 Another day and another suicide bombing, this time in Turkey.

It seems we haven’t had time to clean up after one terrorist attack before the next one. In fact, CNN reports that in the two years following its inception, the Islamic State “has conducted or inspired at least 90 terrorist attacks in 21 countries (other than Iraq and Syria, where its carnage has taken a much deadlier toll) with nearly 1400 dead and more than 2000 injured.”

When we read daily headlines, it’s easy to think that peace on Earth is slipping from our hands and there’s nothing we can do. Those in leadership who could’ve done something against ISIS initially, didn’t, and could do more than token airstrikes now, but won’t.

As I write, Fox News online reports that an innocent little girl living in a West Bank settlement was killed when a Palestinian attacker broke into the one place a girl should feel safe, her bedroom, stabbing her to death while she was sleeping. It’s hard to comprehend that kind of hate, and it’s obvious our prayers for peace in the Middle East won’t be answered without divine intervention from the Prince of Peace.

Until then, we are left to our own devices like the poor police chief in Sweden who’s trying to stop Sweden’s out-of-control sexual assault problem with wristbands imprinted with the slogan: “Don’t touch me.” Police hope the wristbands will help to fix a problem statistics show has increased a thousand-fold since the country first opened its doors to massive immigration from Muslim countries, the Daily Caller reports. While Sweden gets a thumbs-up for its big heart, they get two thumbs-down for not protecting their girls.

In another part of the world, the Jerusalem Post reports: “Two boys under the age of 18 were crucified by Islamic State in the streets of the Syrian city of al-Mayadin.” Apparently, they got caught eating during Ramadan. The Post also reports that ISIS leaders encouraged followers to “escalate attacks on Christians, Shi’ites and Sunnis fighting with the US-led coalition,” asking jihadists “to turn Ramadan…into a time of ‘calamity for the infidels,’” and “become exposed to martyrdom.”

Some would say that mission was accomplished in Turkey. Turkish President Recep Tayyip Erdogan said the jihadists who bombed the Istanbul airport were “going straight to hell” for the hell on Earth they caused.

Amidst all the killing and chaos, it’s easy to think that the hope for peace on Earth is dead as did Henry Wadsworth Longfellow. During the Civil War, Longfellow temporarily lost all hope when his son was severely wounded at, of all places, the Battle of New Hope Church. His wife had passed away in a fire, not long before.

As we all know, life’s circumstances can steal away our hope and suck the joy out of living if we allow it. That stark reality was accurately reflected in the poem, “Christmas Bells,” penned by a deeply grieving Longfellow on Christmas Day, 1863.

The initially joyful poem realistically transitioned just like life sometimes does from: “I heard the bells on Christmas Day their old, familiar carols play, and wild and sweet the words repeat of peace on earth, good-will to men!”

Thankfully, his poem didn’t end there, nor should ours, despite current events. Be encouraged, because the One that Longfellow knew who “is not dead nor doth he sleep” will one day cause the “wrong to fail” and “the right to prevail, with peace on earth, good-will to men.”