Susan Stamper Brown
|
Posted: Jan 19, 2016 12:01 AM
Share   Tweet
The opinions expressed by columnists are their own and do not necessarily represent the views of Townhall.com. 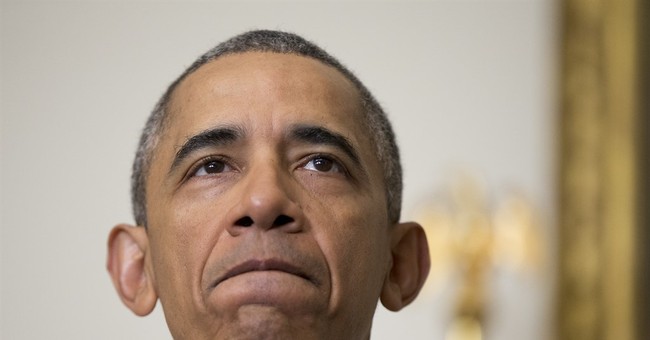 We should be thankful the Obama administration is nearing its end. This year is bound to have its share of surprises and grandstanding from a president who seems more enamored by regimes like Iran than America. The administration relentlessly insists the Iranian regime can be trusted to keep its word and honor treaties, even after the recent hostage-taking of U.S. Navy sailors who weren't released until we apologized.

In short order, the Obama administration did its best to communicate the swift return of the sailors was due to their diplomatic outreach to Tehran. The release was about as connected to diplomacy as a homemade video was connected to Benghazi.

As the saying goes, a picture paints a thousand words -- and what a picture was painted when a humiliating video surfaced showing the boat's captain apologizing to Iran. NCIS's Leroy Gibbs would be appalled, given his rule #6: "Never apologize - it's a sign of weakness." Despicable videos followed of sailors on their own boat, apparently kneeling in submission at gunpoint, displaying the picture of weakness this administration exhibits and America's enemies exploit at every opportunity.

And elsewhere in some alternate universe to which the Obama administration dwells, Secretary of State Kerry thanked Iran for its "diplomacy" in their handling of the matter.

As I write, news breaks about the release of four additional hostages from Iran, which at first blush seems to contradict my opinion about the administration's new BFF, but as I read further, the hostages came with a hefty price tag. In addition to the pending $150 billion from Obama's nuclear deal, apparently seven Iranians were released from U.S. custody, and charges were dropped for an additional 14. With details still unclear, and given the Bergdahl debacle, one can't help but be suspicious of any deals this administration cuts.

Surely, we would've had those hostages back straightaway, if, like Ronald Reagan, America stood up to evil regimes rather than constantly capitulating. Admittedly, words sometimes work, as Reagan's presidency taught. History shows us Reagan's tact also allowed him to tell the enemy to go to hell in such a genteel way, our enemies appeared to gladly anticipate the trip. "We maintain the peace through our strength; weakness only invites aggression," Reagan said.

Of course, sometimes a good punch in the face communicates much better than words.

What business does the Obama administration have doing deals with Iran anyhow? Throughout the whole nuclear deal negotiation process, it's been documented that Iranian leadership continued to chant "Death to America" and say the U.S. remains "the great Satan and their "number-one enemy." Were I in charge, I would take that personally. As Senator Tom Cotton (R-Ark.) said, "When someone chants... death to America, we should take him at his word, and we shouldn't put him on the path to a nuclear bomb."

As retired U.S. Army lieutenant general Michael Barbero wrote in an article for the Weekly Standard last August, the Obama administration's nuclear deal also lifts sanctions on the man responsible "for sowing sectarian conflict in Syria, Iraq and Yemen." Iran's Islamic Revolutionary Guard Corp Quds Force Commander Major General Qassem Suleimani is also responsible for the deaths and injuries of thousands of American soldiers fighting in Iraq - yet we're about to pour in his pockets "a large infusion of cash to wreak more havoc and terror," Mr. Barbero wrote.

One can't help but wonder what sort of terror might be visited upon the planet once the sanctions are removed and the billions begin to flow. After all, there is a reason why, up until this administration, America didn't negotiate with terrorists.