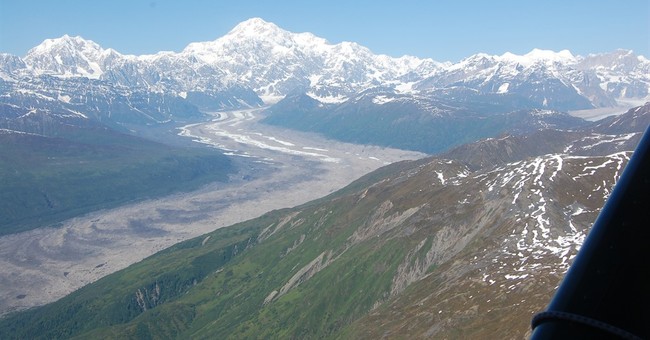 "Study the past if you would divine the future." - Confucius

President Obama told some whoppers the size of Mt. McKinley (I mean Denali) about global warming while he was here in Alaska.

At a climate change conference in Anchorage, Obama attempted to scare the long-johns off Alaskans he obviously thinks are stupid when he predicted coming "submerged countries, abandoned cities... entire industries of people who can't practice their livelihoods, desperate refugees seeking the sanctuary of nations not their own, and political disruptions that could trigger multiple conflicts around the globe."

Honestly, it sounded like he was describing the effects of his policies thus far, but I won't go there.

But then, the strangest thing happened. It was as if the planet's Creator laughed at all that nonsensical hot air rising. Temperatures dropped and it snowed. A lovely summer snow, dusting the mountaintops, reminding those with common sense who's really in control. Not us. If I were him, I would've taken the hint, loaded up my eight ton gas-guzzling armored "Beast" and headed back to the Oval Office to deal with more important things like the Chinese Warships spotted off Alaska's coast while he was sightseeing.

I guess we should ignore that back in May, NASA said global warming isn't causing polar ice retreat. In fact, NASA's satellites revealed the planet's "polar ice caps have not receded at all since the satellite instruments began measuring the ice caps in 1979," says Forbes.com. That is, if you want to believe NASA.

I suppose we should also overlook Obama's war on the Trans-Alaska pipeline. One doesn't need to be a rocket scientist to see Obama's killing the Alaska oil pipeline by slow bleed, currently pumping 500,000 barrels per day -- versus 2.2 million, years back. Might he care more about ANWR's caribou than he does about Alaskans considering most of Alaska's state revenue comes from the oil industry?

I can't help but wonder if Obama would've even visited if he really believed his own hysterical hype. The millions of dollars spent and carbon footprint wasted just so he could check a box on his bucket list to climb a glacier. If he believed his hype, why'd he order better Coastguard ice-cutters?

Surely he knew that the Exit Glacier, his apparent poster child for global warming, has been in a state of retreat since just after the Little Ice Age. Fact is, the glacier did the majority of its retreating in the 1800's to early 1900s, long before manmade greenhouse gas was a thing. Especially in a sparsely populated and largely undeveloped place like Alaska. Overall, since the Little Ice Age, the Exit Glacier's retreated more than 1.25 miles, possibly trekking on a journey to return Alaska to what it once was.

Shhh, don't tell the alarmists, but Alaska was once a tropical paradise. In 2004 an Arctic expedition team, Integrated Ocean Drilling Program, used ice breakers and a drilling rig to core out and remove the first-ever Arctic sediment and samples from the ocean bottom. They discovered that millions of years ago the Arctic Ocean was ice free with a year-round average temperature of 74 degrees -- meaning something other than oil drilling, fracking, wood burning, coal mining, or other man-caused greenhouse gas activities heated the Arctic.

Speaking of gas, one of the scientists affiliated with this research, Netherlands palaeoecologist Appy Sluijs said, "Basically it looks like the Earth released a gigantic fart of greenhouse gases into the atmosphere - and globally the Earth warmed by about 9 degrees Fahrenheit."

While up here, Obama also predicted the Earth will warm up to 12 degrees by century's end and said deniers "are on their own shrinking island." Wow. That's three degrees higher than what happened last time. If he's right, the earth better get busy doing what it does to work up all that gas. In the meantime, this denier who trusts the Creator will get busy up here in Alaska with some online bikini and sandals shopping.