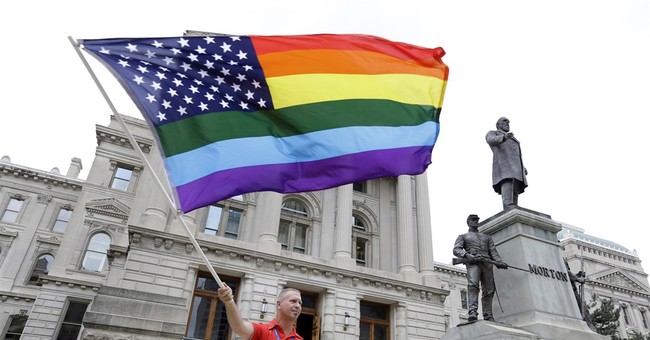 Oh, the injustice of five justices wearing black robes, so overwhelmingly endowed with special superpowers, they can read what's not written and create sketchy laws out of thin air. They declared something as a fundamental right, though it can't be backed by verbiage in the Constitution, according to Chief Justice John Roberts. But now, "it's the law."

America's founders did their best to safeguard against this type of tyranny with the separation of powers, understanding when a government goes rogue, liberty wanes. The legislative power to make laws was given to Congress, not judges. Judges are to determine whether or not a law violates the Constitution, not make judgments or create laws based on personal whim, political leanings or pop culture. Like the Bible, the Constitution is not something we need to update like the latest fashion trend.

In essence, the Supreme Court's 5-to-4 decision and President Obama's rainbow colored White House was a one-fingered salute to the Constitution and an enormous number of Americans who either believe in the traditional definition of marriage that is as old as Creation itself, or strongly agree with America's founders, that these decisions should be decided by individual states, not mandated by the federal government.

A national survey by the Family Research Council conducted by WPA Opinion Research back in February found 53 percent of participants believed marriage should be defined only as a union between a man and a woman. Interestingly, 60 percent thought the courts should not be in the business of redefining the definition of marriage while 61 percent thought citizens and individual states should have the power to define marriage, not the Supreme Court. And 81 percent of Americans, including 80 percent of non-religious people, strongly believe government should allow people to freely "follow their beliefs about marriage as they live their daily lives at work and in the way they run their businesses" - not be sued for refusing to bake wedding cakes for religious reasons.

Nonetheless, five liberal lawyers garbed in fancy black robes made their decision based on "an act of will, not legal judgment," Chief Justice John Roberts wrote in his 29-page dissent. "It is not about whether, in my judgment, the institution of marriage should be changed to include same sex couples," Roberts wrote. "It is instead about whether, in our democratic republic, that decision should rest with the people acting through their elected representatives, or with five lawyers who happen to hold commissions authorizing them to resolve legal disputes under the law." While conservatives are still befuddled with Justice Roberts' poorly reasoned Obamacare decisions, it seems he at least understands that the judicial branch is not given constitutional authority to create laws. But, because these presidential appointees are, might we now be a bit more picky about whom we allow in the Oval Office?

For activists, these current victories will never be enough. Human nature warrants that the right to marry will not satisfy the hunger for indulgence without restraint. Soon after the decision, Time magazine ran a story about ending tax exemptions for religious institutions while others wrote that legalizing polygamy is next on the agenda. Early-20th century philosopher Herbert Marcuse prophetically described what we see happening today as "repressive tolerance," whereby those whose beliefs hold to the 2000-year Judeo-Christian marriage standard are bullied and labeled as close-minded crazy radicals. Indeed, to "fundamentally transform America" as President Obama promised, the left must erase and replace absolute truth with the opposite, as Romans 1:24-25 says.

The Twitter hashtag #LoveWins went viral after the SCOTUS' decision. Love didn't win. Five rogue justices won and America had one big loser. As Justice Roberts wrote, "If you are among the many Americans - of whatever sexual orientation - who favor expanding same-sex marriage, by all means celebrate today's decision...But do not celebrate the Constitution. It had nothing to do with it."