Susan Gingrich
|
Posted: Jan 27, 2016 12:01 AM
Share   Tweet
The opinions expressed by columnists are their own and do not necessarily represent the views of Townhall.com. 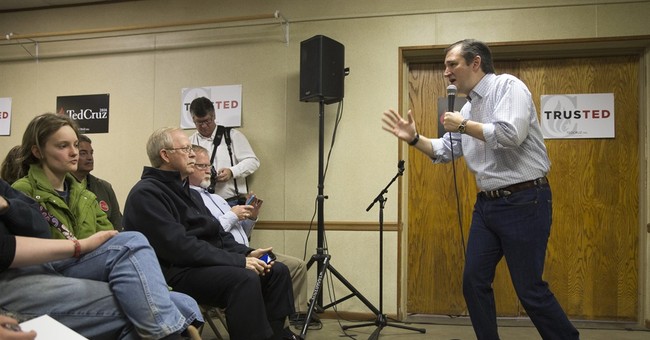 Like many other Americans, I am both excited by and concerned about the upcoming presidential election. It affords the opportunity to fix all that was broken by the current White House Occupier in Chief. To reestablish the importance of our Constitution, and reinstate the only constitutional powers of the branches of government-to execute, legislate, and to judge, based on established law.  To restore the first amendment and religious rights of the majority, eliminating an unequal preference for the rights of the fringe minority.

This year, we are blessed with a plethora of really good Republican candidates. In a normal presidential election year, I would be glad to vote for any one of them. I suspect each of them could hold their own against Hillary Clinton (she isn’t Bill in a skirt, or a pantsuit), or any other candidate selected by the Democrats. Just running on the truth about our opponent’s record and experience would do. But this isn’t a normal election; it is an exceptional one. It calls for an exceptional candidate and communicator. Ted Cruz is my choice to lead us out of the wilderness. To help our county once again become the strong leader of the world, with all the hope, prosperity, respect and fear it deserves.

I support Cruz, because I believe that he will be the leader most like Newt. So you think you know Newt, part of the Republican establishment, right? I challenge you to look at Newt’s biography. Wikipedia will do. Don’t try to read it on your tiny phone-go to a library.  There are many parallels between Ted and the younger, fighting Newt, who led Republicans to a great and historic victory in 1994. I saw it immediately when Cruz took office, and was surprised that the similarities weren’t noticed by conservative media.

Newt was a conservative, before it was cool. He ran for Congress in Georgia, a Democrat-controlled state, against a 20-year incumbent, twice. On his third attempt, Newt won and joined the Georgia congressional delegation, as the sole Republican member. Prepared well in advance, both Newt and Ted came to Washington with the skills, ideas, and vision to be a leader immediately.

Neither was afraid to take on the Washington insiders. Neither was willing to accept the old and pervasive “go-along-to-get-along” attitude held by so many of the Republican Congressional leadership at the time. Because of their direct, bold, non-conciliatory styles, Newt was and Cruz is considered a pariah by the Republican establishment.  The House Republican moderates tried very hard to keep Newt and his conservative ideas out of the House leadership. They lost and Newt won. It wasn’t much different from the treatment Cruz receives from many Senate colleagues, especially those who have been there for what seems like an eternity.

Newt clearly, boldly, and loudly verbalized his intentions—and Cruz does too. Both were personally blamed for shutting down the government, when Clinton/Obama were equally responsible. Is shutting down the government always wrong? Shouldn’t there be constitutional and conservative principles and values worth putting government on hold temporarily? We desperately need a president who won’t just make a deal or compromise, but leads, based on a position of strength, integrity, and the will of the people. A mature president more concerned for our security than for his legacy. Another president whose first thought upon rising is, “What can I do today to keep Americans safe?”

The Democrats and the “drive-by media,” as Rush calls it, did everything they could to destroy Newt. They, plus most of the Republican establishment, are doing the same thing to Cruz. Thank goodness for the conservative media that exists today.

Fortunately, many voters are already interested and engaged in this election. Many are motivated by discontent, grave concerns for the future of their families, and an enormous overriding fear for their personal security. They are distrustful of leaders in Washington, who consistently disregard the will of the people. Still, hope remains eternal that the president we so desperately need exists, and the America we loved and believed in will be restored.

When the Republicans took over House leadership in 1995, many of them wore a small pin which said, “Thinking is good”. Thinking alone is not good enough for this election. Before casting a ballot, voters need to think for themselves, and to listen carefully to the candidates. To concentrate on the issues candidates deem most important, and examine their concrete, understandable, and realistic solutions. To always remember the past, too, and hard lessons learned. There is a need to ignore the influence of the mainstream media, with their parroted talking points, and to read even conservative commentary with a grain of salt. To concentrate on the really important things and not to be influenced by celebrity, polls, sideshows, and slick ads people are paid highly to make. The very last thing America needs is another self-centered, braggadocious, talented communicator and showman, lacking the requisite knowledge and experience to really change America.

America needs a strong leader who fully understands and follows the Constitution. A president who will think and talk of “we”, not of “me”. A president who will make us proud, instead of embarrassed. Republicans needed Newt’s vision, stubborn determination, and leadership to change Washington and restore their pride. We needed Reagan’s exceptional leadership to restore our confidence and pride as Americans.  Now America needs Ted Cruz to restore the security, prosperity, opportunity, integrity, and God-fearing country our forefathers envisioned!