Short Term Lending – The Only Hope For Some

Steve Sherman
|
Posted: Feb 18, 2016 10:50 AM
Share   Tweet
The opinions expressed by columnists are their own and do not necessarily represent the views of Townhall.com. 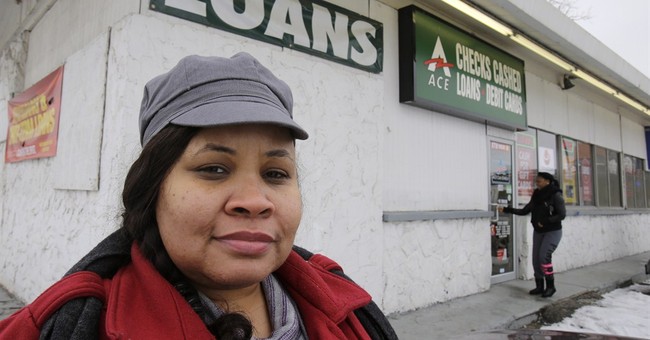 Recently, the Committee on Financial Services held a hearing to address the issue of the Obama Administration's attack on short term lenders. The Consumer Financial Protection Bureau(CFPB) is a creation of Dodd-Frank and has made it their mission to destroy short-term and small-dollar lenders, as well as, take out much of the new online lending opportunities that Americans currently enjoy.

I have written extensively about this as a typical government overreach and a crony payback to the big banks. I have been criticized for protecting the short-term lenders. People are easily worked up and call these companies names like predatory and abusive simply because they charge high rates.

If you understand anything about credit you realize that higher risk equals higher interest. Without these companies providing a needed service in America, you won’t have just higher rates, you won’t have access at all. The people who need their car fixed can’t get a loan at a regular bank. C’mon, anyone can understand that.

These unique niche lenders provide a valuable service to the ones who need it most and they are firmly regulated already. If the CFPB has their way, they will be regulated out of business.

Here’s a story of a real American success story and why I am willing to write about this critical issue.

“Robert Sherill was a drug dealer.He was young and he made some serious mistakes. In his own words, “When I needed money, I sold drugs.” Eventually his crimes caught up with him and after several years in prison, he emerged resolved to build a better life for himself.

The only problem was that no one would take a risk on Robert. He couldn't get a job. He couldn't get a loan. He couldn't even get a bank account. The deck was stacked against him. It was against these odds that Robert decided that if he was going to turn his life around, he needed to start his own business.

Enter a local small dollar lender who understood Robert’s situation and designed a financial product to fit his needs. Robert understood the loan needed to be paid back. He understood how much it would cost. And he made a decision that was right for him.

Today, Robert’s business employs 20 people and is still growing. He is a member of his local chamber of commerce and of the Better Business Bureau. He is a productive member of his community, but it all may have been for naught if he couldn’t access a small dollar loan. That’s why the CFPB’s attempt to shutdown small dollar lenders through regulatory fiat is so disturbing. It threatens to cut off the roughly 51 million American consumers who are unbanked or underbanked from accessing what may be the only type of credit available to them.

What the CFPB is attempting is nothing less than a Washington power grab. It is decreasing consumer choice, increasing the cost of credit, and reducing credit availability to the most vulnerable Americans.

Republicans know that the greatest consumer protection is competition and choice.

If we promote more choices, then we can create more opportunities for low and moderate income Americans like Robert to rise up and build better lives for themselves. And if we don't -- if Washington is allowed to limit Americans' financial freedoms and choke off access to small dollar lenders -- then stories like Robert's will become a lot less likely.” Read the full story here.

Online loans represent over 17 million individuals and make up one-third of the consumer credit industry. If the CFPB is allowed to regulate as they wish this entire segment of the industry is at risk of full collapse.

Consumers will experience greatly increased costs. Availability of credit will diminish for some, entirely disappear for most. Paperwork will be increased to more than it takes to currently get a mortgage.

Basically, the 17 million people who utilize this form of credit will be out of luck with nowhere to turn other than your friendly neighborhood loan shark.

Encourage your congressmen and senators to stand with the people, not the big banks or government run by fiat. Tell the Committee on Financial Services to rein in the CFPB, not a thriving American industry.