California Tries To Give Away Clean Cars - Please Take Them!

Steve Sherman
|
Posted: Jan 08, 2016 6:01 PM
Share   Tweet
The opinions expressed by columnists are their own and do not necessarily represent the views of Townhall.com. 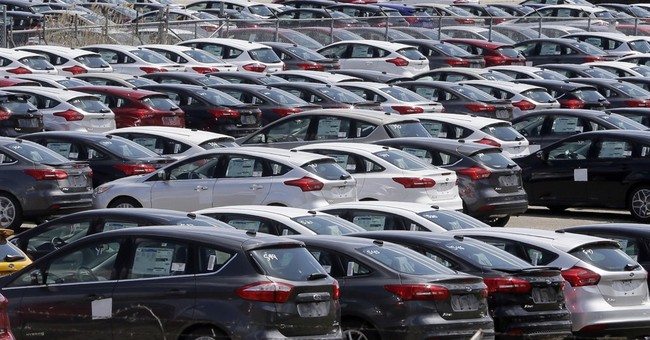 Economics 101. You know the product is bad when you can’t give it away.

It doesn’t take a scholar to figure out that clean cars are a failure. People overwhelmingly don’t want them. Only the most diehard of the greenies have diluted themselves into liking their hybrid/electric golf cart for the open road. So what is a leftist government to do when the peasants won’t play along with their clean energy dreams? They do what they do best…spend taxpayer money. California is desperate to be the clean energy example to the world even if it bankrupts them. Not nearly enough people have bought into the whole clean car thing to make that dream a reality. All those “Dirty Cars” must go!

If electric cars won’t fly in California, they won’t anywhere. California is full of liberals who would love to be humming down the highway. Economics is not a respecter of party or ideology. Numbers are cold and impersonal. If the price of an electric car is not market friendly, they won’t sell, even to tree-hugging liberals. Something must be done. Someone in government had the brilliant idea to try to incentivize clean car purchases. Government is so predicable it gets boring. California launched the Enhanced Fleet Modernization Program “Plus Up Project” designed to make hybrid and electric cars more affordable to low income folks. Basically, pay people to buy these wattage wonders.

The Plus Up program promises to give as much as $12,000 toward the purchase of an electric car if you are adequately poor. Whooie! I bet electric car sales are going through the roof! Well, maybe not. The plan uses the federal poverty level (FPL#s) as a metric to determine who gets how much money. If you make an income less than or equal to 225% the poverty level you can get $12,000 for your new Kilowatt-Cadillac. That means that if you are a single person just out of school making $25,000 a year you qualify or a family of four can make up to $45,000 and still qualify. However, the cost of living in California is 50% higher than the rest of the country so the national FPL’s would be significantly wrong for Californians. I’m sorry, I should stop being so negative…it’s all about the fish and the air. Do you want poor people driving clean cars or not?

Take a look at the pictures of these little hummers and you will see why no family of four will buy on to this. Only a family of anorexic models could fit into these battery-powered tin cans. That leaves our poor-lefty-single-person to sign up for their new ecofriendly ride. How cool will it be to show up at your liberal buddie’s house or the next Jerry Brown rally in your new clean car? Sweeet! So let’s go get it…what color do you want?

Sadly, our occupy-wall street wannabe is in for another surprise. The Plus Up program leaves the customer with a $20,000 bill for the new vehicle. I thought it was affordable clean energy? Don’t forget to add $1 to purchase a Hillary bumper sticker. Houston we have a problem. I don’t know too many people making $25K/year (living in California) who want to buy a $20,000 car, no matter how good it makes them feel about the environment. They can’t afford it! Remember, economics is cold-hearted. Oh, but there’s more…if you qualify (it doesn’t say how) California will also give you a couple grand toward buying a car charger for your house. Wait…what? Yes, you need a car charger for your house among other things. With my experience charging up my smart phone…I’d be getting a sinking feeling right now. Don’t worry about repairs either. I’m sure these tiny little electro-rides are super cheap to work on. Right? This deal keeps getting better all the time. Thanks for nothing California!

Don’t feel bad if you can’t afford a new Leaf or Golf, California is not done. You have the opportunity to get rid of that dirty car you’re driving now. You know you’re embarrassed to be seen in it. Do it for the world, you know you want to. It’s better to have no car at all, than to drive a gas-guzzling-smoke-belching-whale-and-baby-and-ozone-killing dinosaur! California will give you (depending on your income) between $2500 and $4500 in public transit credits if you will simply scrap that old dirty Pontiac. Cash for Clunkers Cali-style.

You know it’s bad when they can’t even get liberal Californians to buy into clean cars. Economics don’t care. California don’t care. Electric cars are a marketplace failure. You can’t give ‘em away.