Steve Chapman
|
Posted: Jan 12, 2017 12:01 AM
Share   Tweet
The opinions expressed by columnists are their own and do not necessarily represent the views of Townhall.com. 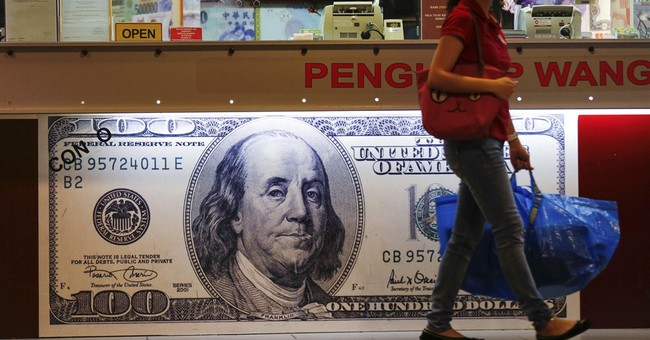 Trending
Upon becoming House speaker in 1995, Newt Gingrich decided it was crucial to adopt a plan to eliminate the federal deficit. In a meeting of House Republicans, Budget Committee Chairman John Kasich balked: "Where is it in stone that we have to balance the budget in seven years?"

Gingrich had a quick answer: "Let's put it to a vote. Who wants to put it in stone?" Everyone but Kasich voted yes. The Republicans had made a commitment they would have to keep.

Contrast that show of determination with the vote last week by Senate Republicans for a budget resolution that projects an increase in the public debt of $9 trillion over the next decade. The supporters said that for arcane reasons involving budget rules and the repeal of Obamacare, the resolution is needed. But in practice, they insisted, they don't intend to allow such a flood of red ink.

Maybe not. But the fiscal responsibility upheld by Gingrich and company -- which led to a balanced budget not in 2002 but in 1999 -- is not visible on either side of the aisle today. Between 2009 and 2015, the deficit shrank from $1.4 trillion to $438 billion -- but last year, it rose, and the Congressional Budget Office expects it to balloon to $1 trillion by 2024.

Nor is the incoming president likely to accept serious budget discipline as President Bill Clinton did. On the contrary, Donald Trump will probably cause a lot of congressional Republicans to stop worrying and learn to love the deficit.

House Republicans have a plan to balance the budget by 2026, but the details are lacking. Not only that but they will have to contend with the next president. The Tax Policy Center in Washington reported in October that his proposals would add $7.2 trillion to the government debt over the next decade -- comparable to what has been piled up in the past eight years.

There are other alarming signs. Trump's border wall with Mexico will cost $8 billion by his calculation and double or triple that by other estimates. He claims Mexico will pay for it. But he and Congress aren't prepared to wait for him to get the money. They plan to start construction now and send Mexico the bill.

This is the equivalent of taking out a loan that you plan to pay off with the lottery ticket you just bought. In the best (and least plausible) case, we'll have to wait awhile for the Mexican treasury to cut the check -- "a year or a year and a half," Trump blithely estimated at his news conference Wednesday. In the worst case -- which happens to be the one President Enrique Pena Nieto has embraced -- we won't get a single peso and American taxpayers will eat the expense.

Scrapping the Affordable Care Act, it turns out, would be a fiscal loser overall because of the taxes it imposed and the Medicare savings it implemented. The bipartisan Committee for a Responsible Federal Budget recently reported that a full repeal would add between $150 billion and $350 billion to the debt over the next 10 years.

Under a fiscally responsible approach, the CRFB advised, "savings from repealing parts of the ACA must be large enough to not only finance repeal of any of ACA's offsets, but also to pay for whatever 'replace' legislation is put forward. This is not an easy task, and it will likely require policymakers to retain or replace the majority of ACA's health and revenue offsets."

But Congress and the president-elect appear to have every intention of torching the ACA now and fighting the budget fire later. Reducing taxes while pledging to cut spending eventually is a familiar tactic, and it functions reliably to enlarge budget problems rather than solve them.

The ongoing retirement of the baby-boom generation puts great pressure on the budget, as it has to cover more and more retirement checks and Medicare bills. Another looming strain is the interest on the debt, which has been pleasantly manageable because interest rates have been so low. But they are bound to rise in the coming years, and if Trump gets his fiscal plans enacted, interest alone could cost taxpayers upward of $1 trillion a year a decade from now.

Both Congress and the president-elect have told Americans they will balance the budget. But that promise is written in sand.