Steve Chapman
|
Posted: May 15, 2016 12:01 AM
Share   Tweet
The opinions expressed by columnists are their own and do not necessarily represent the views of Townhall.com. 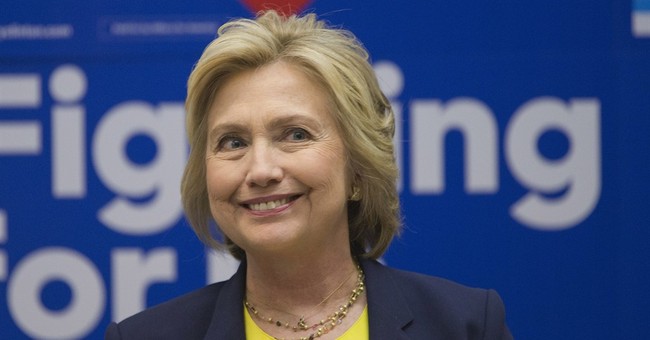 Trending
Decades ago, the wealthy owner of the Washington Redskins lamented the free-spending ways of his head coach, George Allen: "I gave George an unlimited budget, and he exceeded it." Other owners knew there were ways to beat Allen, but outspending him was not one of them.

Hillary Clinton ought to keep that in mind in her race against Bernie Sanders, who formulates budgets as though he were running the world's biggest counterfeiting operation. You can't match him when it comes to burning through cash, and it's dangerous to try.

That's one puzzle with Clinton's proposal to let people of "a certain age" -- say, "55 or 50 and up" -- buy Medicare coverage instead of private insurance. This idea is not likely to win over anyone leaning toward Sanders, because he will always offer more.

His "Medicare for all" blueprint is extravagantly generous: It would cover everyone, not just those close to the current retirement age, and it would provide far more than what Medicare now offers.

You can do that when you assume that torrents of money will fall out of the sky to cover the expense. The bipartisan Committee for a Responsible Budget says that even with the gigantic tax increases Sanders would impose, his health care scheme would add at least $2.6 trillion to the federal debt over a decade. In a less rosy scenario, it could pile on $13.7 trillion - roughly as much as the entire current publicly held federal debt.

Clinton has been a relative model of budgetary sobriety. Oh, she doesn't mind spending: Her proposals would add an estimated $1.75 trillion in federal outlays by 2026. But she also intends to finance almost all of that sum with higher taxes and various savings measures.

The CRFB estimates her net addition to the debt would be just $200 billion over 10 years. Donald Trump, by the way, makes Sanders look like a penny-pincher: He would add between $10.7 trillion and $15.4 trillion.

Clintons' Medicare buy-in, the details of which have not been released (or possibly even figured out), may or may not follow her comparatively disciplined fiscal approach. There are two basic paths she could take.

The first is to charge these new enrollees the full cost of insuring them. In 2008, the Congressional Budget Office estimated that putting 62-to-64-year-olds on Medicare would add costs of about $7,600 per enrollee. Today, that would undoubtedly be larger.

The problem with option No. 1 is that it wouldn't be terribly enticing to the voters whose favor she seeks. Thanks to Obamacare, which Clinton has so often extolled, they can already get private insurance, with federal subsidies to help many of them pay the premiums.

Her proposal implies that Obamacare is not the glittering success she claims. "Aren't the exchanges supposed to offer 'affordable' coverage to these same people?" asks economist Joseph Antos of the conservative American Enterprise Institute. "What is the problem being addressed here?"

Charging full fare would make the Medicare buy-in a good deal only to those afflicted by more than the usual quota of ailments -- because their health care expenses will usually exceed the standard premium. In that case, Medicare would lose money on them, and the taxpaying public would bear the burden.

That could be what Clinton has in mind -- which brings us to option No. 2. As Sanders has demonstrated, it's easy to attract voters if you promise them lots of new benefits that will be paid for by someone else.

George W. Bush also chose this route when he pushed through a program to cover prescription drugs for Medicare patients. The premiums they have to pay cover just 15 percent of the cost.

Come to think of it, Medicare itself rests on the same gimmick. The CRFB says the average male earner turning 65 today has paid in $70,000 in taxes for the program and will get $195,000 in benefits. For the average woman, the payback is even bigger -- $227,000. That's one reason the Medicare trust fund is on track to run out of money by 2030.

This approach also happens to be the natural tendency of politicians. As president, Clinton would find it far easier to win public support and congressional cooperation if she doesn't insist on making the program fiscally self-sufficient.

If we know anything about American voters, it's that no matter how much they want something from Washington, they strongly prefer not to pay for it. Clinton probably won't ask them to.