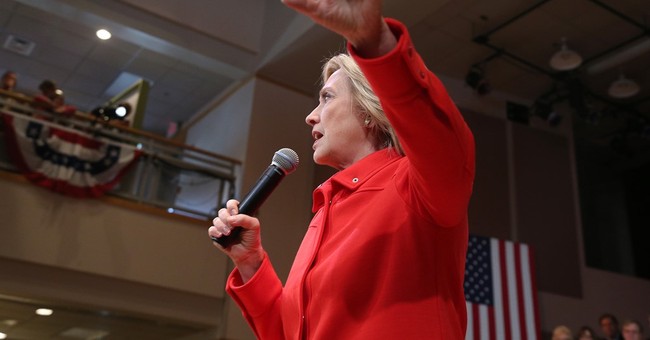 Trending
Barack Obama promised he wouldn't take away anyone's guns, but gun rights alarmists have spent seven years incessantly predicting he will. From his experience, Hillary Clinton seems to have decided to skip the part of the campaign that involves placating the National Rifle Association.

Recently, at a town hall meeting in New Hampshire, she was asked about adopting a federal gun control program like the one enacted in Australia in 1996, which banned automatic and semiautomatic rifles and shotguns and mandated the buyback of those already present. Some 650,000 guns were taken from citizens and destroyed.

Clinton replied, "I do not know enough details to tell you how we would do it or how it would work, but certainly the Australian example is worth looking at." The reason, she said, is that "by offering to buy back those guns, they were able to curtail the supply and to set a different standard for gun purchases in the future."

At this, the NRA activated the air raid sirens. Obama and Clinton, it declared, have "made clear what they're really after -- national gun confiscation."

It was an unforced error that she will never hear the last of. From how Clinton phrased her answer, though, it's pretty clear that she was thinking of a voluntary buyback. She compared it to Obama's Cash for Clunkers program and cited voluntary programs done in various cities.

Given the fate of such previous gun control measures as the "assault weapons" ban (which was allowed to expire) and universal background checks (which were rejected), a savvy politician could not possibly imagine a mandatory program getting through Congress.

From a political perspective, there is nothing to gain from pretending otherwise. Her spokeswoman, asked whether Clinton was proposing mass confiscation, replied, "Of course not."

But many gun control advocates think we ought to emulate Australia. They claim the 1996 law reduced homicides, reduced suicides and stamped out mass shootings, and they insist that if we want to end the carnage here, we should be taking similar steps.

The effectiveness of what the Aussies did, though, is not so clear. It's true that in the years after the law took effect, gun homicides and suicides declined. But they were declining before it took effect. Gun murders also subsided in this country after 1996. They fell in New Zealand, which declined to embrace the Australian approach.

Does the 1996 law deserve credit for saving lives? Don Weatherburn, director of the New South Wales Bureau of Crime Statistics and Research, told PolitiFact that the evidence is "far from conclusive." Harvard's David Hemenway, a darling of gun control supporters, admitted, "We really don't know."

Some research does suggest the effort was successful. Even if you accept that view, it's a stretch to think it has much relevance this side of the Pacific. Andrew Leigh of Australian National University and Christine Neill of Wilfrid Laurier University, whose study indicated that the program worked, admitted the experience may not be transferable.

"The ability of an island nation to restrict illegal gun imports," they wrote, "coupled with the absence of any domestic gun manufacturers producing for the retail market, meant that legal restrictions on gun ownership were more likely to 'bite' in Australia than would be the case in countries with porous land borders." Like, um, ours.

Not to mention that a mandatory turn-in would meet fierce, widespread resistance in this country. Maybe you've heard of the NRA? Finding and seizing guns from uncooperative owners would be a logistical nightmare, a political disaster and quite possibly a bloodbath.

Even in Australia, experts estimate that only one-fifth of the guns in private hands were removed. Here, the share would be smaller.

What about a voluntary program? For evidence on that option, you don't need to look at Australia. Many American cities, including Chicago, have offered payments to anyone turning in a firearm. But the people who respond are generally people who present little danger, if any.

A 2004 study by the National Academy of Sciences offered no encouragement. "The theory underlying gun buyback programs is badly flawed," it found, "and the empirical evidence demonstrates the ineffectiveness of these programs."

The Australian law has zero chance of being adopted here and probably wouldn't work if it were, while a voluntary version would be a waste of time. But if Clinton wants to help the NRA, she's found the perfect formula.