Putin Will Find Appearances Can Deceive 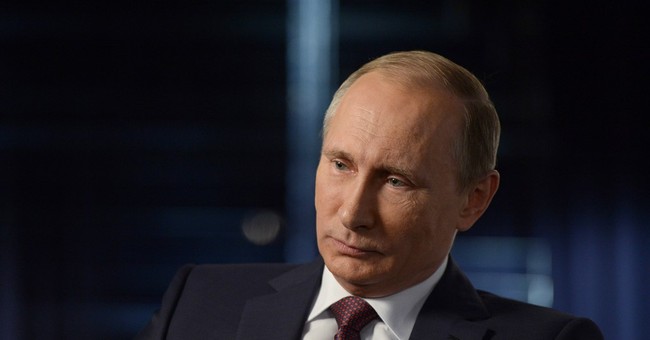 Trending
It's now a tenet of conventional wisdom that our policy in Syria is an embarrassment as well as a flop. Washington insiders place great importance on "optics," and the sight of Russian President Vladimir Putin flexing his muscles is making their eyes sting.

Condoleezza Rice, secretary of state under George W. Bush, and Robert Gates, secretary of defense under Bush and Barack Obama, couldn't agree more. The Russian strongman "sees a vacuum created by our hesitancy," they wrote in The Washington Post. "Moscow matters again in international politics, and Russian armed forces are on the move."

And their point is? Moscow matters again, true -- but in a hellish region that has a way of bringing outsiders to ruin. Russian armed forces are on the move in the same way they were in 1979 in Afghanistan, where they lost 14,000 lives before departing in humiliation.

The detractors attach too much to symbolism and perception. Bush looked formidable on that aircraft carrier with the "mission accomplished" sign shortly after the Iraq invasion. But it was an illusion.

The critiques don't address, much less answer, the questions about Syria that ought to be central: What important American interests are at stake? How does Russian intervention threaten them?

Putin is assisting a regime that has been a Russian ally for decades. He may help Syrian President Bashar Assad quell a civil war that has fueled both the Islamic State group and al-Qaida. His prize for success? Keeping a naval base and maybe having a say in a negotiated settlement.

A deal to end the war that involves the Russians might require Obama to give up his demand for Assad to step down. But it would also do useful damage to our extremist enemies. Obama may not think so -- or may just not want to say so -- but we stand to gain if the current regime can regain control of the country.

In that case, Cato Institute analyst Benjamin Friedman offers a sardonic suggestion: "Maybe once we pull off that trick, we can get the Chinese to take over in Afghanistan."

If the Russians fail, though, they will suffer. Putin's embassy in Damascus was hit by mortar rounds this week, and the head of al-Qaida affiliate Nusra Front proclaimed, "If the Russian army kills the people of Syria, then kill their people." The blowback we have faced for so many years will veer toward Moscow.

The rulers in Riyadh financed the rebels who fought the Soviets in Afghanistan, and they are expected to arm and fund those fighting the Russians in Syria. The Saudis will be spending money, which they have in abundance, while the Russians will be sacrificing lives, which they don't.

Jonathan Schanzer and Boris Zilberman pointed out in The National Interest that "a Saudi economic war against Russia is also underway" -- which consists mostly of pumping enough oil to keep the price of Putin's chief export depressed. Oh, and "some Saudi preachers are casting this conflict as a religious one." The Kremlin shouldn't count on a happy ending.

What does the U.S. stand to lose from Putin's venture? Nothing of critical importance. Assad's regime poses no threat to us, and most of its enemies do. Our involvement in the region has yielded us mostly huge losses and the chronic threat of terrorism. If we extricate ourselves from the brambles just as Putin plunges in, we'll be better off, not worse.

We once felt obligated to police the Persian Gulf to prevent the Soviets or anyone else from using its vast oil reserves for coercive purposes. Fortunately, the 1970s are over. The oil weapon, always overrated, is now about as frightening as a fly swatter.

Hawks think we have to use military force to stop terrorism. By now, we should comprehend that intervening in a foreign civil war swarming with jihadis is the best possible way to generate terrorist attacks on American targets.

What the alarmists regard as weakness and indecision can be more accurately characterized as firm prudence and immunity to panic. The administration's critics let themselves be addled by appearances.

Obama has mostly managed to focus on things that affect our security. Putin, by contrast, is making a mistake that is familiar to Americans. How do you say "mission accomplished" in Russian?