Innovation vs. Intervention in Health Care 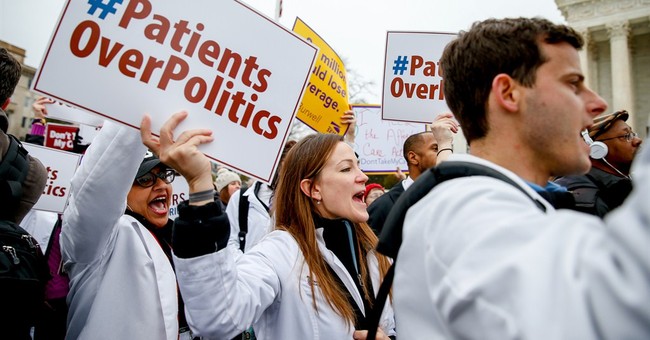 Trending
Editor's Note: Steve Chapman is off. The following column is by Veronique de Rugy.

How can we produce better health for more people at a lower cost, year after year? By lifting all the rules and barriers that prevent health care innovators from bringing new lifesaving products to consumers and force doctors to beg bureaucrats and insurance administrators for permission to save lives.

For years, free market types focused most of their attention on how to provide better health insurance coverage than their liberal counterparts. But is this the right approach? Health care coverage is different from health care. Though introducing more consumer choices and competition among health care suppliers certainly affects health care prices, nothing would have as radical an impact on prices and quality in the health care industry as revolutionary innovation -- which we've seen in other fields, e.g., information technology.

For that, we must first free the health care supply from the many constraints imposed by federal and state governments and the special interests they serve.

At the federal level, that means, among other things, radically reforming the Food and Drug Administration. The FDA is the perfect example of an agency that works by the "precautionary principle" norm. In the name of protecting people from everything at any cost -- even against their will, if need be -- it imposes an incredible regulatory burden on health care innovators, which then translates into higher costs and fewer new products available to consumers.

In some cases, the FDA's intervention in the health care market slows down access to certain drugs, or it makes some drugs and technologies unaffordable to low-income individuals. In other cases, it actually drives innovators out of the market. In extreme cases, it kills people who could have been saved if they had had access to a drug or a technology.

As laudable as the efforts by Congress to reform the FDA have been, they haven't worked. One reason is the tendency of the agency to be captured by special interest groups. For instance, large, established pharmaceutical companies might complain about the cost of new regulations, but they are well aware that their competitors will bear these same burdens. Smaller upstarts, however, are thwarted by the heavy cost of regulation before they even get a chance to enter the market.

So what can be done? Some argue that the only way to productively reform the FDA would be to allow for a private alternative. In The Wall Street Journal last year, neurosurgeon-scientist and entrepreneur Kevin Tracey described such an alternative. He wrote: "Institutional review boards and human-subject research protocols provide extremely high levels of protection overseeing clinical trials in the U.S. and Europe. These bodies have weeded out the charlatans in the industry, and the ultimate determinant of success will be patient satisfaction."

Others suggest getting rid of federal and state regulations that prevent people from having access to more and better information about drugs, medical devices and procedures; forbid them to try new, unapproved drugs when they or their loved ones are terminally ill; and preclude doctors from offering new treatments to their patients. As my colleague Adam Thierer at the Mercatus Center told me, "we should focus on ensuring patients a 'right to know' and 'right to try,' and doctors should have a 'right to heal.' It's time to put patients first and trust them."

Indeed, people often are better-suited to know what is best for them than bureaucrats in Washington. Moreover, these reforms would be important first steps to allow tech innovators to work their magic in health care. This would result in spectacular reductions of health care costs -- making the need for health insurance much less important than it is now.