Our Crazy Treatment of the Mentally Ill 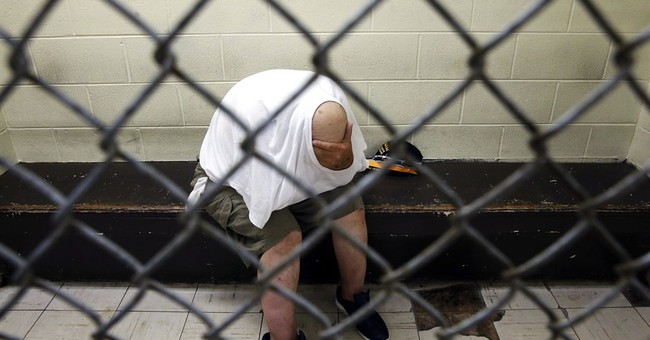 Trending
A Bronx man died in police custody last week after police responded to a 911 call. An Iraq combat veteran in El Paso, Texas, serving a two-day DWI sentence died after being subdued by guards. A woman died after being Tasered by sheriff's deputies in a Fairfax, Va., cell.

What they had in common, besides expiring abruptly while in the hands of law enforcement officers, is mental illness. Denis Reyes was afflicted by bipolar disorder. James Brown reported being diagnosed with post-traumatic stress disorder. Natasha McKenna had a history of schizophrenia.

We used to warehouse the mentally ill in overcrowded, unsafe asylums -- "loony bins" -- where they often got crude or ineffectual treatment, if any, and endured violent abuse. But our civilization has moved past that primitive stage. Now we warehouse them in jails and prisons, where their conditions are often even worse.

It may seem odd that the new executive director of the Cook County Jail, Nneka Jones, is a clinical psychologist, not a career cop or corrections official. It makes more sense when you consider that nearly a quarter of the inmates have mental illnesses.

Sheriff Tom Dart refers to the facility as the nation's biggest mental institution. But he's got nothing on Illinois prisons, which house six times as many mentally ill inmates as the jail.

The numbers will only get bigger. One of the grim consequences of Illinois' fiscal insolvency is Gov. Bruce Rauner's proposal for a 15 percent cut in funding for the state's mental health agency -- which pays for treatment, housing and other services to help those with psychiatric disorders function in society.

Last month, Dart told The Chicago Tribune he sees this approach as a mistake: "It doesn't make sense to cut service that prevents people from coming into the criminal justice system, which is a very expensive system to come into."

Cost aside, it creates hazards for them as well as corrections officers. A new study by Human Rights Watch says, "Persons with schizophrenia may experience prison as a particularly frightening, threatening environment and as a consequence some behave dangerously toward themselves, staff, or other prisoners."

Many, it says, "refuse to follow orders because hallucinations and delusions have impaired their connection with reality." The mentally ill violate the rules far more often than other inmates, for obvious reasons, and efforts to control them often aggravate their insanity. Some, like the prisoners cited above, end up injured or dead.

Short-term budget needs sometimes take priority over long-term cost-effectiveness. But it's clear that governments need to improve their policies toward citizens who have lost their hold on sanity.

Another cause is a shortage of good outpatient care. The idea behind the "deinstitutionalization" of the 1950s and '60s was that the mentally ill could be helped more humanely while living and being treated in community settings. But many of those released from asylums never got the help they needed.

The results were disastrous, and not just for them. In his book "The Insanity Offense," psychiatrist E. Fuller Torrey notes that a study of 81 cities found "a direct correlation between the decrease in the number of public psychiatric beds and the subsequent increase in homelessness, arrest rates and crime rates among mentally ill individuals in those cities."

Sally Satel, a psychiatrist and scholar at the American Enterprise Institute, says one remedy is to expand mental health courts, diverting some criminal offenders to non-punitive programs involving medication, treatment and monitoring.

Another, she says, is for state and local governments to be more active in the use of mandatory outpatient treatment for mentally ill people who repeatedly end up in jail, emergency rooms or homeless because they can't care for themselves or make rational decisions.

Such measures will require funding. "We're not putting enough into the people who are the most sick," Satel told me. But there is no way for any of us to escape the social and fiscal costs of serious mental illness.

We're putting a lot into these people, but in all the wrong places -- jails, prisons and even morgues. Addressing mental illness differently would be a welcome symptom of sanity.