Can Huckabee Win? Can Biden? 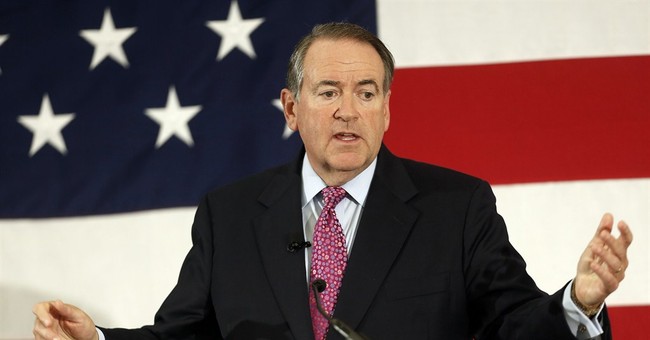 Mike Huckabee mounted an impressive campaign kickoff Tuesday, has a natural base among evangelical voters in the Republican Party and won eight states in the 2008 race. Joe Biden, who went nowhere in two previous bids, isn't running yet and may not. But if either has a chance of being elected president, it's the latter.

Huckabee ought to be a strong contender. A former governor of Arkansas, he came in second the last time he tried, thanks to his speaking skills, affable personality and (being a former Southern Baptist pastor) strong appeal to conservative Christians.

He showed more polish on television than any candidate since Ronald Reagan. He even killed it on "Saturday Night Live." He looked like a candidate who could spend four years broadening his base and capture the 2012 nomination.

But Huckabee took a different route. Since 2008, he's spent most of his time writing books aimed at conservative readers, doing talk shows on radio and Fox News, giving well-paid speeches and endorsing survival ration kits. His campaign so far is perfectly designed to assure him a nice living doing more of the same.

His new book, "God, Guns, Grits and Gravy," has a title you would use if you aspired to be president -- president of Waffle House. It serves to 1) make a lot of urban and suburban voters think you're a bumpkin and 2) let conservative rural residents know you don't care what those fancy folks think of you. It's a way to corral the Sarah Palin fan club, but no one else.

Even more striking, pardon the expression, is his TV spot, "Rattlesnake," which claims the only way to deal with Muslim jihadists is the way you deal with rattlesnakes: "take their heads off with .410 shotgun or a hoe."

This spot will win the hearts of voters who enjoy a closeup view of a venomous serpent lunging straight at them, which I estimate at one in 10,000. It's a video only a herpetologist could love.

Actually, that's not true, because a herpetologist would reject the premise. In truth, rattlesnakes are not aggressive toward humans; they are shy and timid. It's hard to get bitten by one unless you actively seek them out -- which, come to think of it, may have some parallels with terrorist groups abroad. But the lurid approach suits Huckabee, who is running to create a spectacle, not to win.

_Biden should have zero chance of being nominated, short of his boss vacating the presidency. In 2008, he got less than 1 percent of the vote in the Iowa caucuses and immediately withdrew.

He has obvious shortcomings, like a famous fondness for hearing himself talk and an unerring knack for gaffes. His street-smart manner has made him fodder for hilarity in The Onion as a hard-living macho dude (sample: "Biden To Honor Fallen Soldiers By Jumping Motorcycle Over Vietnam Memorial").

So how could he win his party's favor? It's not impossible that Hillary Clinton will collapse or slowly deflate from one unflattering revelation after another. In that scenario, the party would need someone with relevant experience, good name recognition and a record that is not too liberal to win the general election.

Elizabeth Warren fails the last test and arguably the first two. Martin O'Malley, the former Maryland governor, was invisible until the Baltimore riots and probably wishes he had stayed that way. James Webb and Bernie Sanders have views too iconoclastic for mass consumption.

Who else is there? John Kerry has been mentioned, but not since 1968 has either party been willing to give a losing nominee an encore (Richard Nixon). Biden's chief ally is the process of elimination.

He can more than hold his own on the campaign trail. If you don't believe me, ask Paul Ryan, who found himself at the business end of a buzz saw in their 2012 debate. Contrary to Onion myth, the vice president is a churchgoing teetotaler and devoted family man, though sometimes overly, um, tactile with female acquaintances.

For seven years, Biden has been at the side of Barack Obama, which won't hurt him with most Democrats. But he offers some traits they often wish the president had, like a blunt, passionate style and a talent for voicing blue-collar concerns.

On top of all that, Biden would see running for president as something to do only if you intend to win. Huckabee's campaign indicates all sorts of motives, but not that one.