Is Obama To Blame for the World's Crises? 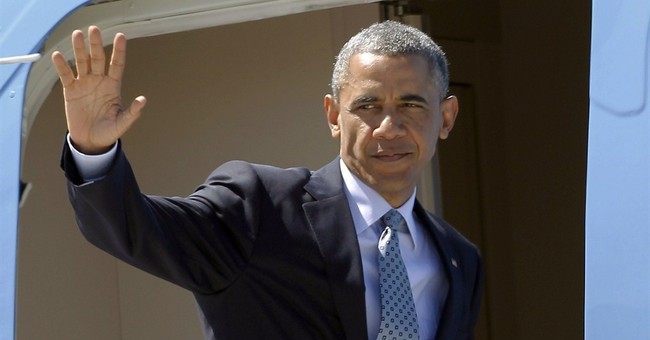 The world is a hot mess. Pro-Russian separatists shot down a passenger jet over Ukraine. Iraq is under siege from Islamic radicals, the Taliban is rebounding in Afghanistan and civil war grinds on in Syria.

Israel is fighting in Gaza. Negotiations on Iran's nuclear program have come up empty. China is bullying its neighbors.

When trouble flares up around the world, U.S. presidents get blamed. The latest polls show that only about 36 percent of Americans approve of Barack Obama's handling of foreign affairs -- down from 51 percent in May, 2011, after the death of Osama bin Laden.

Republicans have not been reluctant to place responsibility on him. "Obama has presided over a recent string of disasters that make even (Jimmy) Carter look competent," wrote Marc Thiessen, a former speechwriter for George W. Bush. "The world is on fire -- and Obama's foreign policy legacy is in tatters." Sen. Lindsey Graham of South Carolina charged that "his policies are failing across the globe."

The indictment implies that had the administration been tougher or smarter, Ukraine would be intact, Syria's dictator would be gone, Iraq would be stable, Hamas would surrender, China would be a gentle lamb and Iran would give up its nukes.

Conservatives say Obama thinks he's king. But they seem to confuse him with God.

It's easy to forget that planet Earth has always been a turbulent locale. During the Reagan administration, often fondly recalled as a golden age, there was endless strife hither and yon: civil wars in Central America; Americans taken hostage in Lebanon; a U.S. military barracks blown up in Beirut; and Libyan terrorists bombing a Pan Am plane.

Reagan may get credit for causing the collapse of the Soviet Union, but tranquility didn't follow. It wasn't long before Iraq invaded Kuwait, Yugoslavia erupted into bloody ethnic conflict, civil war broke out in one African country after another, famine ravaged Somalia, Palestinians rose up against Israeli rule, and Pakistan and India fought a war after acquiring nuclear weapons.

And the 21st century? It did not turn the world into a serene oasis where America consistently got its way. The 9/11 attacks, the war in Iraq and the war in Afghanistan are still fresh in our minds. The Russian invasion of Georgia, al-Qaida's migration into Pakistan, Somalia and Yemen, Israel's war in Lebanon, the civil war in Sudan -- those are easy to forget.

When was this era of harmony that Obama has somehow forfeited? It never happened. And it's not likely to emerge under his successor. Even at the height of our post-Cold War power and influence, nasty events happened all the time, and we couldn't stop them.

The Cold War era was a bit more controlled, because so many governments were dependent for their security on either the U.S. or the Soviet Union, who could often keep them in line. But there was still plenty of bloodshed in plenty of places -- from Vietnam to the Indian subcontinent to Lebanon to El Salvador. Often, neither Washington nor Moscow got what it wanted.

Nor is it obvious Obama could have achieved much with more assertive tactics against the Russian government or the Syrian government: His options were few and unpromising. Nothing short of a NATO military response -- which even the hawks didn't propose -- would have stopped Putin from seizing Crimea.

Arming the Syrian rebels could have meant giving aid to the militants marching on our ally in Baghdad. Staying in Iraq and Afghanistan, as many Republicans advised, was a formula for wasting American lives to merely delay the inevitable.

Yet the belief persists that the difference between a bad outcome and a good outcome is a willingness by the U.S. government to exercise leadership or show toughness or otherwise get involved. In practice, our interventions often exact a terribly high price for a dismal result. If there are two ways to get a dismal result, maybe we should choose the one that doesn't cost us thousands of lives or billions of dollars.

We like to think we can easily shape the world to suit our preferences. But as the 19th-century historian Henry Adams pointed out, chaos is the law of nature, and order is the dream of man.