How the B-52 Became Immortal 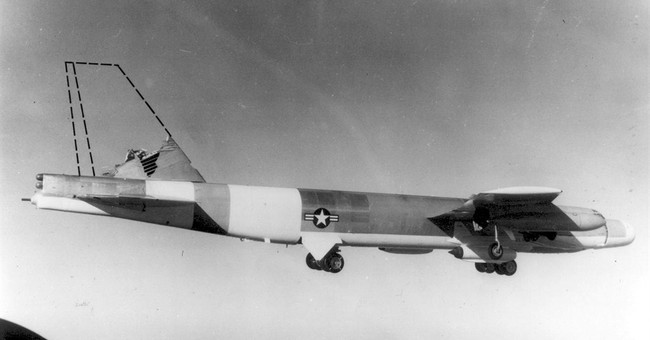 If and when the U.S. attack on Syria takes place, it will be different in some ways from any previous intervention. But it will have one thing in common with every war the United States has fought in the past 50 years: B-52s will be available for the fight.

This bomber is the combat aircraft that will not die. In 1977, when Congress was debating whether to build a replacement called the B-1, the complaint was that the B-52 was older than the pilots flying it. This fact was supposed to capture its obsolete character and sagging decrepitude.

The pilots of the 1970s may no longer be fit for duty, and other planes of that era can be found only in museums. But the B-52, which began production in 1952 and stopped in 1962, has defied the actuarial tables. Air Force Capt. Daniel Welch is piloting a plane that his father flew during the Cold War and his grandfather flew in Vietnam, The Los Angeles Times recently reported.

Don't be surprised if another generation of the family is in the cockpit before it goes into retirement. The Air Force plans improvements that will keep the plane around till 2040.

It's not quite your grandfather's B-52. True, its onboard computers are pitifully underpowered antiques and some models still have vacuum tubes -- Google that, kids. Barry Posen, director of the Security Studies Program at MIT, informs me that "there are dials in the B-52 cockpit that have not been connected to anything for years."

But the plane has been repeatedly remodeled and upgraded to assure its utility, with new engines and electronics. Soon it will be "getting modern digital display screens, computer network servers and real-time communication uplinks," according to the Times.

The B-52 is known in the Air Force by the profane acronym BUFF, whose first three letters stand for big, ugly and fat. But it has survived innumerable attempts to phase it out in favor of flashier, more expensive models -- many of which long ago ended up on the scrap pile. Its endurance is a testament to the value of being sturdy, cheap and good enough for government work.

Originally designed to deliver nuclear bombs onto targets in the Soviet Union, it turned out to be ideal for raining havoc on communist positions in Vietnam -- a tactic that became known by the immortal term "carpet bombing." It could carry up to 81 500-lb. bombs.

The plane was meant to soar above anti-aircraft fire, but when the Soviets developed missiles that could reach high altitudes, it was adapted for low-altitude penetrating missions. When the enemy devised technology to foil those, the Air Force turned it into a platform for nuclear-tipped cruise missiles -- which could be launched from outside the Soviet Union.

Meanwhile, it retains its value for bombing missions against adversaries who lack formidable air defenses -- as in Iraq, Afghanistan and Serbia.

One of its virtues is relatively low cost, which presumably makes the Pentagon more willing to use it. The high price tags on the B-1 and the B-2 Stealth bomber mean the Air Force can't buy as many of them and has to exercise more caution about putting them in harm's way.

Another factor is that while more advanced aircraft possess capabilities that are rarely needed, the B-52 is perfectly adequate for most real-world contingencies. MIT defense scholar Owen Cote told me that since the 1990s, "we've been essentially continuously at war against smaller powers with weak or nonexistent air defenses, against whom the range, persistence and versatile payloads of the B-52 can be invaluable."

The reason it might not be used in Syria is not that it wouldn't be helpful. If Syrian air defenses were knocked out, it could take on the same role it has in past wars. But the attack might be done entirely with missiles fired from Navy ships.

The B-52 has certainly been used in a lot of conflicts that the United States would have been wise to avoid. But it allowed us to fight them more effectively and less expensively than they could have been. It also dissuaded Congress from wasting even more money on unnecessary substitutes.

It is not about to stop serving those purposes anytime soon: Boeing says the aircraft may still be operating on its 100th birthday. The Air Force has another long-range bomber on the drawing board. But to the B-52, a drawing board is just another soft target.