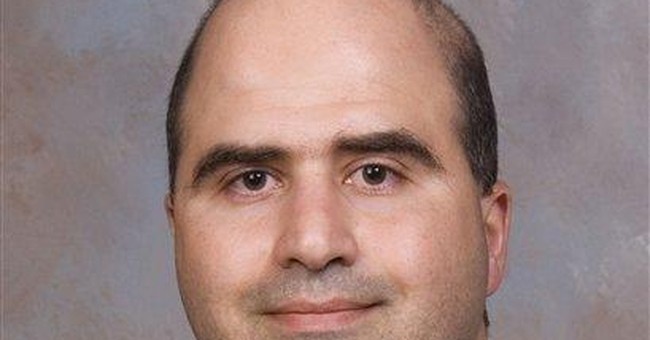 Mass murders are usually a mystery. When Maj. Nidal Hasan allegedly committed one last week at Fort Hood, though, there was no time wasted in solving the mystery by blaming the massacre on his religion, which is Islam.

Maybe Hasan is just a homicidal lunatic set to work by fevered demons inside his brain. But post-9/11, you can't be a killer who happens to be a Muslim. If you're a killer, it has to be because you're a Muslim.

In this case, the claim of a religious motive has some evidentiary basis. Hasan had contacts with an extremist imam. The Army psychiatrist had been known to rail against the U.S. wars in Iraq and Afghanistan and to argue that Muslims should be allowed to leave the military rather than fight against other Muslims. He reportedly shouted, "Allahu Akbar!" -- Arabic for "God is great!" -- as he began his rampage.

In spite of his views and e-mail buddies, neither the Army nor the FBI (which monitored his correspondence with the cleric) found enough grounds to take action against him. Maybe they were blinded by "political correctness" not to do anything that might offend Muslims. Or maybe his past comments are being exaggerated with the benefit of hindsight. Or maybe those who noticed simply concluded he posed no more danger than other cranks.

It's also possible, as so many insist, that the slaughter was a direct product of a violent brand of Islam that encouraged and sanctioned his deed. But even if that's the case, it doesn't tell us what to do about it.

Is the Pentagon supposed to refuse induction to Muslims? Do extensive vetting before accepting them? Continuously monitor their Internet use? Generally treat them as suspect, which almost none of them is? Blustering about "political correctness" doesn't offer practical solutions to a malady that is about as common as a two-headed cow.

The Defense Department says there are 3,572 Muslims in the American military. The American Muslim Armed Forces and Veterans Affairs Council puts the number at more than 15,000. Either way, the overwhelming majority must be loyal and true, or the Fort Hood massacre would not be unusual.

Obviously, a soldier who expresses a radical anti-American ideology demands intervention. But if all military authorities have to worry about is getting rid of every service member who applauds suicide attacks, they will not have much to do. No one thinks "political correctness" obligates the Army to treat Muslims more leniently than anyone else. But it's just as simple-minded to think they deserve to be treated worse.

Hasan's views are way outside the mainstream of American Muslims. A 2007 poll by the Pew Research Center found that very few of them hold radical beliefs. Eight percent think suicide bombings can sometimes be justified, which means 92 percent do not. Only 5 percent said they had a favorable opinion of al-Qaida.

Does that sound like a lot? Keep in mind that 13 percent of Americans have a favorable view of North Korea. That's right: North Korea.

Some commentators insist that Islam is inherently aggressive, intolerant or bent on taking over the world by force. But contemporary terrorism, which is supposed to prove that, doesn't. As University of Chicago scholar Robert Pape has documented in his research on suicide attackers, most are motivated mainly by non-religious concerns.

Of 41 people who carried out suicide attacks in Lebanon between 1982 and 1986, he noted in his 2005 book "Dying to Win: The Strategic Logic of Suicide Terrorism," 30 were affiliated with groups (SET ITAL) opposed (END ITAL) to Islamic fundamentalism, including secular communist, socialist and Baath organizations. Three of the attackers were Christians. What the perpetrators shared was not a religion but an intense resentment of an occupation by foreign powers (the United States, France and Israel).

This motive, Pape says, is characteristic of suicide attackers wherever they emerge, including Iraq and Afghanistan. The terrorists' quarrel with the U.S. is not that it is an infidel society but that it's seen as occupying Muslim countries.

Osama bin Laden has made the point himself. Dismissing President Bush's assertion that "we hate freedom," he once said, "Let him tell us why we did not strike Sweden."

The al-Qaida leader likes nothing better than to portray the United States as waging a crusade against Muslims. We would be doing ourselves no favor to confirm the accusation.