The Certain Loser In This Election 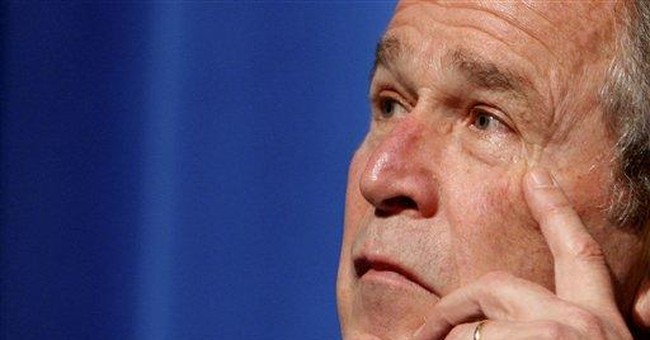 They might even prefer the candidate they elected in 2000. The one who promised to be "a uniter, not a divider." Who said he would "call for responsibility and try to live it as well." Who said the United States should be "a humble nation." Who faulted Al Gore for plotting to enlarge the government.

That candidate soon became famous for exploiting divisions, refusing to hold himself or his subordinates accountable, letting expenditures soar and making America synonymous with arrogance in much of the world. Whatever Americans hoped Bush would provide, it's safe to say that an open-ended war, an assault on the Constitution and an economic panic were not among them.

Americans may decide to replace him with another Republican, but if John McCain emerges victorious, it will be a tribute to his efforts to convince voters that he and Bush have barely met. Sometimes he sounds like he's running against Bush rather than Barack Obama.

One of his TV ads asked, "The last eight years haven't worked very well, have they?" An earlier one charged, "We're worse off than we were four years ago." At a recent rally, for anyone who missed the subliminal message, he thundered, "I'm not George Bush!"

Any GOP nominee might do the same. But not just anyone could offer attributes that contrast so markedly with Bush's. The president arrived as a foreign policy novice, with only six years in public office and a history of uninterest in what lay beyond our borders. Bush referred to the people of Greece as "Grecians," and in a 2000 radio interview, couldn't name the president of Pakistan.

Those are not the sort of mistakes the Arizona senator would make. McCain has traveled the world and made it his responsibility to inform himself about it, from multiple visits to Iraq to regular appearances at the annual Munich Conference on Security Policy, where defense officials from dozens of countries gather to discuss matters of war and peace.

Last spring, his aides were able to name 69 countries he has visited, which they said was not a complete list. One of the most arresting moments of the campaign came in the second debate, when he said, "I've been to Waziristan" -- winning the prize for the most unlikely boast ever heard in a U.S. election.

He was also a combat pilot and a prisoner of war, both of which tend to confirm one's seriousness in a way that Bush's unimpressive stint in the Air National Guard didn't.

Obama can't flout a military record, but his strengths, like McCain's, have a way of mirroring the president's shortcomings. Bush got where he is with the help of first-class family connections; Obama had to rise through brains and initiative. Bush regularly loses wrestling matches with the English language, while Obama expresses himself with unnerving fluency.

Bush becomes defensive and peevish when asked to answer the simplest questions about his policies; Obama never gets ruffled. Where Bush treats criticism like the Ebola virus, Obama conveys the impression that he hopes to learn from those who disagree with him.

The response of so many people to his message of unity comes partly from weariness with the administration's nonstop scorched-earth tactics. He conveys the novel view that Americans can disagree without hating each other. It's impossible to imagine an Obama attorney general braying, as John Ashcroft did in 2001, that his critics "give ammunition to America's enemies and pause to America's friends."

If Obama loses, though, it may well be because of something he shares with the Bush of 2000 -- a thin political resume that raises doubts about whether he can handle the most demanding job on Earth. If McCain loses, it will be largely because he is identified with the obstinacy and errors of the current White House occupant.

In the end, Americans may vote for either candidate. But after eight years of Bush, most of them will leave the polls singing the words of an old country tune: Thank God and Greyhound you're gone.