Stephen Moore
|
Posted: Mar 29, 2016 12:01 AM
Share   Tweet
The opinions expressed by columnists are their own and do not necessarily represent the views of Townhall.com. 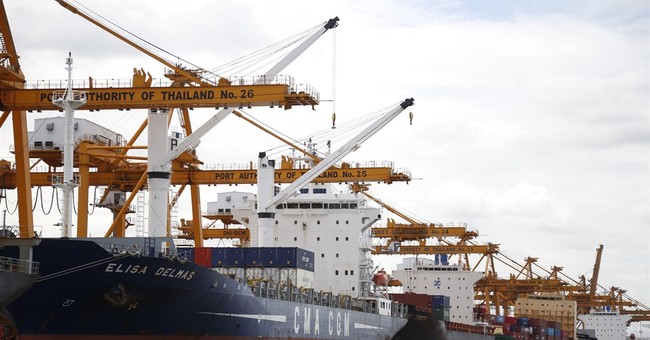 No issue is more entwined in paradox than that of free trade versus protectionism. Here's an example: Polling suggests that voters recognize the benefits of free trade more now than at anytime in many years, even as the presidential candidates advocate more protectionism.

The polling company Gallup recently studied public attitudes on trade over the past quarter century. The question Gallup has asked over the years is whether free trade is more of a "threat" to America or an "opportunity." In 2016, 58 percent of respondents said trade was more on opportunity versus 34 percent who said it is a threat. This may not be an overwhelming acclamation for international trade, but it is the most support Gallup has recorded.

Yet on the presidential campaign trail, Trump keeps scoring victories in Republican primaries with his protectionist threat of a 45 percent tariff imposed on China. Meanwhile, on the Democratic side, Hillary Clinton and (especially) Bernie Sanders keep bashing free trade for shrinking the middle class.

These attacks against international trade are mostly spurious, because American workers engaged in export industries get paid on average 15 percent to 20 percent more than workers in domestic-only jobs. We export high value-added products and import low-cost consumer items.

Dan Mitchell of the Cato Institute notes that free trade has become the convenient political scapegoat for voter frustration with a stagnant economy. "The U.S. economy isn't performing because of a hostile tax and regulatory policies," he notes. "That is why companies and jobs are leaving." He's right. Open trade borders force the politicians to take competitiveness seriously -- something Washington hasn't done for years.

Thank goodness we don't allow California to close off its borders to commerce with Arizona and Texas -- or taxes in the Golden State would really skyrocket.

Here's another trade paradox. Voter support for free trade is rising among Democrats and independents, but falling among Republican voters. As Investors Business Daily recently reported, in the latest Gallup polls, "63 percent of Democrats and Independents said trade is mainly an opportunity (up from the low 30s a decade ago). But just 50 percent of Republicans feel this way, which is down from a high of 57 percent in 2002."

Now we see why Trump's tariff talks are resonating with a segment of conservative middle-class voters. Some of this rejection of trade among Republicans may be a knee jerk reaction to Obama's support for the Asia trade deal, which is now being disparaged as "Obamatrade."

The final paradox is that so many liberals, like Bernie Sanders, keep claiming that free trade hurts the poor. Wrong. Protectionism via tariffs is a regressive tax and would almost certainly exacerbate income inequality. The people who benefit the most from low-cost imports from China sold at Wal-Mart or Target are the working poor.

On a global scale, the nations that tend to be the poorest in the world -- for example, North Korea, Bangladesh and tribal African countries -- don't engage in international trade. Opening up markets to trade is one of the best anti-poverty programs ever, much more effective than welfare or foreign aid.

The Gallup data seems to confirm that most voters instinctively understand all this.

That's the good news. The bad news is the paradox that they don't seem to be voting that way.