What, Exactly, Is a Fascist? 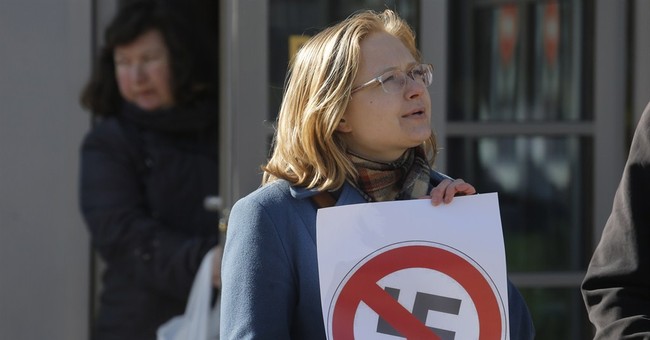 It's hard to find a self-respecting liberal these days who doesn't denounce Donald Trump as "a fascist." If you Google "fascist," the first thing that pops up on the screen is a photo of Trump.

University professors, Democratic pundits and members of the media who don't call him a fascist resort to over-the-top, sneering terms like "racist," "repellent" and even "Nazi." After Trump's call for a moratorium on Muslim immigration, here are a few of the choice words from those tolerant people on the left:

"He is running for President as a fascist demagogue," said Martin O'Malley, Democratic presidential candidate.

"Trump is a proto-fascist, rather than an actual fascist. He has many ideas that are fascistic in nature," wrote Peter Bergen, CNN's national security analyst.

At the end of this sneering commentary, Bergen launched into a fascinating tutorial on what a fascist is. Here are several key characteristics of a fascist leader according to CNN:

1. "The superiority of the leader's instincts over abstract and universal reason."

2. "The belief of one group that it is the victim, justifying any action."

3. "The need for authority by natural leaders (always male) culminating in a national chief who alone is capable of incarnating the group's destiny."

Wait a minute. What modern politician best fits this description? Could it be Barack Obama, the Messiah, the chosen one, the man who holds political rallies with gothic columns in giant

amphitheaters, who enters the stage as if he were a Greek god? Obama is the greatest demagogue of modern times, who convinced the vast electorate that they are "victims" and that the key to happiness and prosperity is to take from the rich: people, he says, who have way more wealth than they could possibly need.

Obama's whole political success rests on identity politics -- on persuading blacks, Hispanics, Jews, women, the disabled, gays, students, the poor and immigrants that they are victims of a vast American government conspiracy against them.

As for belief in the "superiority" of the leader's powers "over reason," Barack Obama, omnipotent, tells his followers that he has the capability of "healing the planet," changing the earth's weather pattern and stopping oceans from rising. He is promising miracles that require people to suspend all reason and believe that he can achieve the equivalent of Moses parting the oceans.

So just who is the "proto-fascist," really?

"Liberal fascism," as my friend Jonah Goldberg has aptly pointed out in his book of the same title, is the "collaboration of government, church, unions and interest groups to expand government. It is simply the liberal impulse for controlling the lives of others." It is the religion of the left.

Ironically, the left intelligentsia that is accusing Trump of fascism are many of the same people in Hollywood who just made a movie celebrating the communists and fascists of the 1950s within their ranks -- and portraying them sympathetically as blackballed victims rather than subversive supporters of the butchers who killed millions of Jews, blacks, gays, Christians and dissidents.

Many of the communists in Hollywood, not least of all Trumbo, the new movie's hero, were avid supporters of Stalin and even remained so after his genocidal purges were well-documented. Even the Russians themselves have repudiated the savagery of Stalin -- but not the American left.

But the real definition of a fascist is a leader who wants to use governmental power to suppress rights of individuals. It is the partnership of government and private industry for the "collective good." Corporate cronyism is a classic form of fascism, which would include programs such as the Export Import Bank.

Fascism, communism, socialism, Nazism, progressivism are all just variations on this same theme. These "isms" all feed on the subjugation of freedom.

The left might want to engage in some introspection and ask why so many millions of Americans -- many of whom enthusiastically voted for Obama -- now agree with Trump. Are these suddenly terrible people? Have they been duped by a charismatic leader? More likely the answer is that an ever-shrinking number of Americans trust Obama to keep the dangerous Muslims out. People want, above all right now, to keep their families safe, and since Obama has no interest in real and effective terrorist screening, many Americans believe it's best to keep them all out for now.

If middle-class American voters are so economically marginalized and so afraid, angry and distrustful of Washington that millions would throw their support behind a man routinely denounced as a dangerous Nazi/fascist, maybe the left might want to ask: Who made things so bad that it has come to this? Without Barack Obama's full slate of failures and his eight years of polarizing politics, there could be no Donald Trump.